Finally, some pics from our adventure last week! Maisy was a wonderful co-pilot and aside from sleeping almost the entire way (bad passenger), she help to assure a safe trip.

This was my first "weekday" trip out to the farm, so it was interesting to see it on a slightly busier, more bustling day.  I met a couple other owners out visiting their ponies and a very polite farm hand, who had a very wicked bruise on his shoulder where P attempted to bite a chunk of flesh out.  (bad mare, no treats)

Cowboy Man's arrival was announced by two very happy labs, who Maisy fell in full on love with after approximately three minutes.  P was second in line for the day, so after lots of hugs and pats and kisses, I watched her get turned out with the herd and for the first time she immediately followed the group down into the back pasture where she is totally out of sight from her stall/safety place.  Cowboy Man was very  pleased, although he did seem to question P's taste in men, since her new found bravery has come from an intense passion for a one-eyed, neurologic, ratty old gelding.... sigh.

After P ran off with the herd, I turned my attention to Sunny, an adorable little QH who's owner is frustrated with Sunny's apparent fear of  nearly everything, including her own shadow (and tail).  Sunny warmed up with some liberty work, then started into her desensitization exercises which included a lot of tarps, treats and random blankets, bumpers and bags.

I really enjoyed the chance to watch Cowboy Man work with another horse and pick another owner's brain a bit.  So far she was thrilled with how far Sunny had come (eating her grain off a tarp! No longer bucking her saddle off!).  It was entertaining, and I realized that I'm not sure I have the patience, or the balls to really work with a horse with Sunny's sensitivity.  It was the first time in a while that I've legitimately watch a horse get worked and thought "wooo boy, I sure am glad that one's not mine!"  Not to be holier than thou, but at least I know P isn't the craziest cat out there... :)

After our adventures with Sunny, it was time for a quick lunch, then we had to hit the trail.  I had the pleasure of riding Wendy, a ginormous dutch mare who was a Big Eq horse in her previous life. Now her only responsibilities are lazing about on trails, grazing and flopping her gigantic mule sized ears around.  (what a cutie).

We started off by scampering about the property, up and down banks, testing brakes and steering.  P was a champ and showed non of her initial skepticism about being ponied.  Instead she seemed more than game to bounce along behind Cowboy Man and his beast.  So we hit the trail.  It started out wide and open which allowed me to really check out P's movement and footfalls.  She's definitely landing more heel first now than she was (yay) and seems to be wearing her hinds (now barefoot) really well.  Her feet are definitely expanding again in response to their freedom and even her front toes (in their natural balance shoes) look like they are making progress. 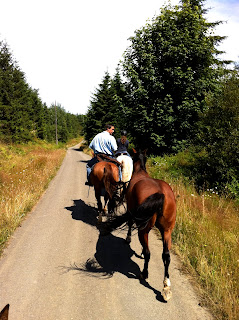 The trail walked us past wolves (huskies), monsters (llamas) and several very-angry-machines (lawnmowers).  None of the horses batted an eye and I was thrilled to see P so comfortable off the property.

Eventually, we peeled off the main trunk and headed for what Cowboy Man said was a "little tighter" of a path.  Then he started rattling on about how he likes to find trails that are a bit grown over so the horses get used to brush on their bellies, sticks, twigs, logs and whatever else comes with a slightly more confined walking area.

Sounded good to me, certainly more entertaining than our basic 'road' that we had followed thus far, so I didn't even register a response, instead I just followed P's cute butt. 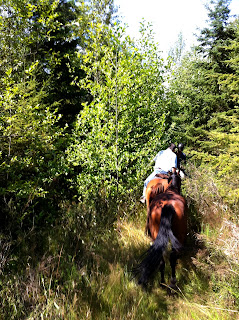 But then, as I watched my horse disappear into the brush, I realized that not only was this not really a trail, but a sleeveless top was a terrible decision. 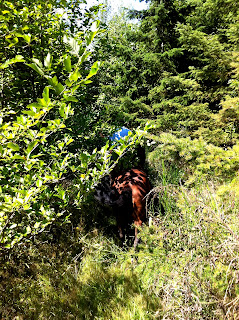 Uh, seriously? that's NOT a trail.  and I am NOT a pioneer.  I distinctly lack the explorer spirit and find "trail blazing" not only uncomfortable, but downright inconvenient.  But, seeing as how I didn't know how to get back to the farm on my own, I simply hugged Wendy's neck and started dodging and weaving the collection of branches, spiders and leaves that began to assault my arms and drop down into my shirt (shuuudder).

Aside from a bit of prissiness, I really did enjoy myself.  P was a champ, and didn't balk once at logs, or puddles or streams or mud flats as we encountered them.  once we had a bit more breathing room we ventured up into some trot work, and eventually even some hand gallops (though Wendy's trot kept pace with everyone's canter just fine).

Ultimately we had a blast.  P seemed excited and happy to be out and she was much more obedient than I was expecting.   Hopefully our next trip is this Sunday, which should see the mare under saddle!!!!

Maisy, was thoroughly unimpressed and fully out of love with the labs by the time we returned.  It seems that she is less enthused with the prospect of adapting to ranch life.  What a goober.