Belated, but happy, show round up!

Have you missed us? BECUASE I HAVE. 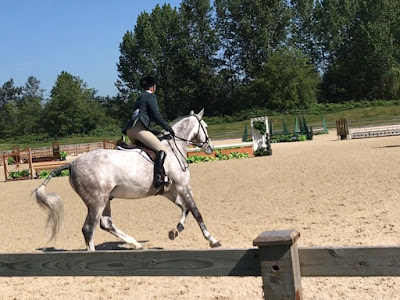 Almost two weeks ago, Winds got loaded up and made his way back to Thunderbird for our first (!!) show of 2017.  The plan was mostly to get him out to stretch his legs (literally) and keep me from going stir crazy at home in the indoor (also, literally) - and I think we accomplished both.

Winds was reportedly quite fresh for schooling day, and in lieu of spinning on the lunge line he had two a day hacks with a decent canter set to help get the wiggles out.

I was there for the first day of showing, which saw Windsy entered in a Hi/Low 2'9" round.  His warm up looked honestly a bit stiff, but in the ring he looked loose and a bit more forward thinking than I am used to the Gray Prince being.  (you can tell because his ears are pinned forward and he's using his shoulders well... otherwise it only *feels* like a powder keg and looks like a lazy Hunter).

Canada now does red/blue rankings for their Low classes, so they don't get traditionally pinned, but a ribbon gets assigned based on how good your score is.  (Winds got a Red, which is first in Canada). I like this system as a way to handle the huge Low classes, but it sorta sucks they all show up as. "DNP" on the USEF record...

Anyway,  that was it for Wednesday.  Thursday I got early to hack Winds around the rings and loosen him up.  He felt great, and it was so, so, so, so nice to be on a horse, in a warm summer breeze taking in the bustle of a show before classes got underway.  SO nice.

A couple hours later Winds had another Low 2'9" round.  This warm up looked a bit smoother, he was stepping under more, and using his back a bit better.  I breathed a small sigh of relief that his body seemed to feel good and watched him head for the ring.


The course looked a lot like the day before.  Totally chill and quiet from my perspective, powder keg on hooves according to the trainer.  So.... another early hack was scheduled for Friday before my magnificent return to the equitation (cough, 2'6", cough) ring.

Friday, I had two rounds and a flat.  And it was hot.  That actually worked in my favor since Winds decided to blow a furry coat out in mid June and was a bit... well... wilted in the sunshine.

Our warm up was blissfully short as I somehow found all my fences decently so we parked at the back gate and watched a couple rounds.

I will say that for having not been in the show ring for 8 months, I feel really (really, really) good about this ride.  There are some, uh, misses.  But, overall, I like my hip angle more, I like Windsor's balance more, and in general it feels more thoughtful that our previous courses together. 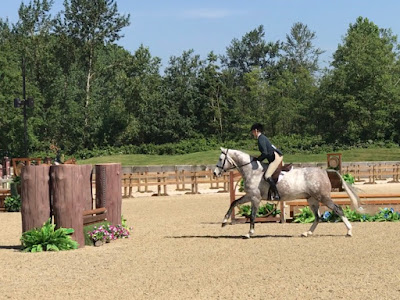 He looks sexy.  (I, on the other hand am in the only hunt coat that currently fits,  WHOOPS).

I actually felt ok about most of the fences, including the first one (YAY!).  But, I was particularly bummed about the single oxer - couldn't make a decision, then when Winds made one for me, I thought that not staying with him would somehow be a good idea (it wasn't).

Then the rest worked out ok, I kept his balance up and that saved most of it until I chipped the crap out of the bending line at the end.  Lost his mouth, fought for a change, then got out ok.

I got 5th.  And that ribbon is going ON THE WALL, because we made it to a show, made it around and all is right with the world again.

Anyway, second round.  Started with the bending line I ended with before and threw in a rollback (what is this, medal finals??? I'm old and hot and tired...).

Winds was amping up a bit, but we fixed a few mistakes - namely the bending line.  Then I got tight into the diagonal, but recovered.  Into the Judge's line Winds locked on HARD and started dragging me, so I choked him back and got a little weak.  I almost couldn't pull him out of the line (whoops), but I finally got him to let go of the oxer out and pay attention to the rollback.  I actually really liked how I finished the rollback, given how we started....

Then, Winds was thinking this must be a jumper course and he tried to switch gears.  I over compensated and we crawled to the last line, but finished ok.

Oh, also, the video is sideways.  I have no idea how it got sideways, and even less of an idea of how to get it un-sideways, so...sorry

The flat was toasty and a bit brutal.  Winds was good, but apparently I looked a bit droopy (sidenote: I am a bit droopy these days).  My sitting trot is not where it should be, but all else was fine.  Winds couldn't care less about traffic and that's a great feeling when you are nose to tail and fighting for space down the quarterlines.

Somehow our 3rd place on the flat was enough for Reserve, so Winds and I managed to maintain our weird streak of getting Reserve in every division we enter at Tbird.  (it's great for the ribbon wall).

I stuck around to watch the Juniors do their thing, but then I hit the road to join the family for the 4th.  Winds enjoyed some down days and turnout (I LOVE the turnouts at Tbird. #grass).

So now we are home and gearing up for Milner Downs, which you may recall is where I got all my lovely pictures of Windsor galloping across a big grass field.  They also have a really fun Derby.  I'm not sure we'll be ready for it, but I'm not-so-secretly hoping we can enter.

He's been feeling great at home, and I'm really hoping we hold the trend.  This horse is so incredibly fun to ride and learn on, I just want to ride him forever. 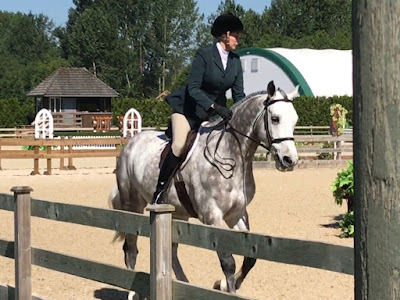