It's been such a long time since I bought any new strap goods (how is that even possible!?), that I have started casually eyeballing them, but with (literally) no reason to buy, I've shown remarkable restraint in not collecting.

This piece found it's way into my trunk in a non-traditional manner, but that's a story for another day.

Today we discuss what I think about it.

A while back I noticed that Voltaire had added a figure-8 and a hunter bridle to their online store.  the photos were remarkably poor quality from a professional marketing standpoint, and I had never noticed one in person, so I wasn't overly tempted.


But, I've been on bridle hunts with a few other barnmates over the past year and gotten to see a variety of new Hunter bridles up close, as well as watched the process of eliminating some over others.

In terms of the "big" European brands, I have always coveted an Antares that hangs in the tack room.  It has a big, padded monocrown, but not ridiculous or overly trendy in it's size or style.  It has a normal (single buckle) throatlatch and looks very acceptable in the hunter ring.  What stands out is the weight, and quality of the leather.  It's the difference between picking up a plastic fork at a picnic, and feeling the weight of your grandmother's silver.  Sure, they mostly do the same thing, but one is just yummy in your hand.

Antares lost me with their weird new anatomical crown (they still offer the less dramatic version).  It looks like an awkward hat and I haven't seen it sit well on a single horse.  I'm sure it works wonders for someone, I'm just not sure who. 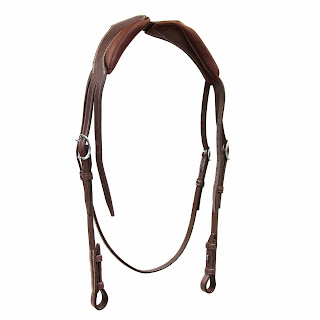 My favorite piece in the next price bracket down, is the Nunn Finer.  I've always thought their leather was of a good quality, and their styling is classic.  It takes some work to get it broken in - but once you get it - I think it rivals Edgewood for quality at a fraction the price. 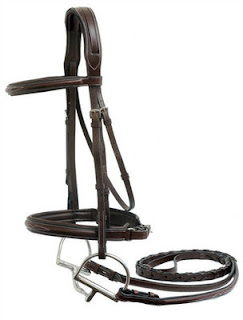 Based on pictures alone, the Voltaire piece is not something I would have ordered.  Their trademark contrast stitching is ALL OVER IT.  each piece of leather has bright stitching down it's side.  Not just the noseband and browband.  Fancy stitch is EVERYWHERE.  Cheek pieces, cavesson hangar, etc. EVERYWHERE.  It's busy.  And the monocrown means that not only is there an extra buckle for the cavesson, but even the throatlatch has a double hanger - which makes for a lot of buckles.  And while the crown isn't overly padded or huge, I wasn't sure about the signature Basque stripe on the top of it. 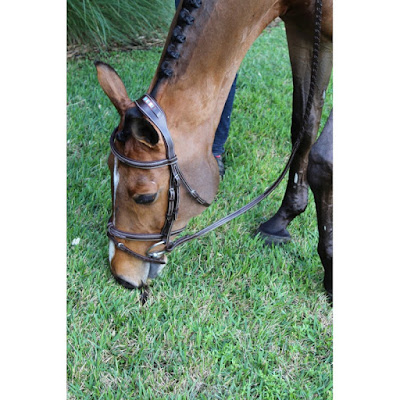 (I also shouldn't have chided Voltaire for their photos, as I have NOT exceeded those standards... whoops. )

While the stitching is bold, the leather itself is rather narrow, and it fits his chiseled-pony-face quite nicely.  The contrast looks classy, and at least on a gray doesn't seem too busy.  After a few applications of conditioner and a night in a ziplock with some oil, everything is feeling appropriately soft and pliable.  The reins are still a tad stiff (and I will note a preference for the CWD laced reins...) but the quality is undeniable.  The padding is also exceptionally squishy, hopefully it is also sturdy. 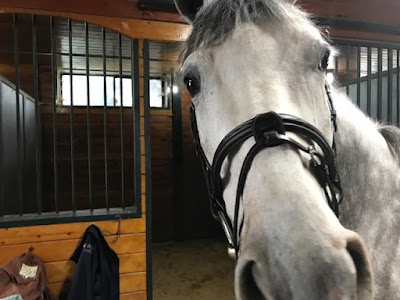 Still not sure I would have pulled it off the rack if I was actually shopping, but now that I have it, I like it.  And I enjoy that it looks a bit different without being obnoxious.

What do you guys like to see in a bridle? How different is too different?