Windsor's first day of showing (in the States) was a great one (for him) and a long one (for me).

I was up at the crack of dawn for an early flight down to California.  It was the time of day where I'm only up if I'm a) still dancing or b) doing something for a horse.  :)

The flight was quick, and although the rental car process was not - I still made it to the show in time for his classes.

Having never shown here - I'm a big fan of the grounds.  Grass everywhere (read: no dust) and the footing is lovely.  Most of the grass we show on at home is pretty gosh darn hard, and so far I'd have to say the footing here is really well maintained here...  The grounds also seem rather spectator friendly with ample shade and seating and places to enjoy the show.  Bonus points for a big Dressage show going on as well so I'm sneaking in some time to watch the super fancy ponies do their super fancy things.

The report from earlier in the week was that he had schooled wonderfully, but since the show rings are on grass - there was no opportunity to take him for a spin in them and see how he felt about grass (or caulks, etc..).

Because of that, we opted to drop him into the 3' so that we didn't feel badly about adding a second division for extra experience.  That meant that N would take him in a (giant) Low 3' division, and the 3' Pre Greens. 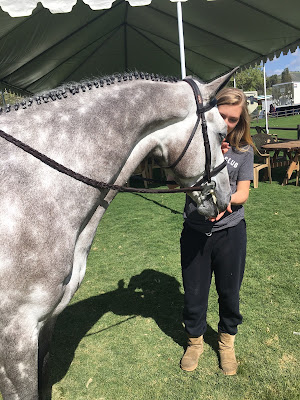 This was (for sure) a good call.  He was calm, and confident in the ring, but still a bit.... jumpery to the fences themselves..

He was definitely a bit confused about the job description and what all was going on in the giant grass field - so much so that he didn't even see the first fence, and ended up with a stop before he even got started... (Monkey-covering-its-face-emoji).

But after that bobble, he got to work and he started to figure things out a bit.  He slowed himself on takeoff, relaxed in the huge turns, and started to enjoy the show. 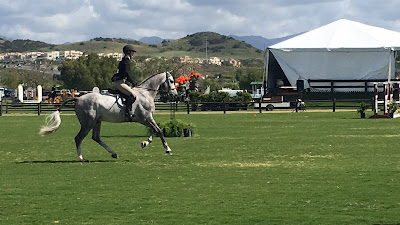 He was able to do all four rounds nearly back to back, and really looked like a total pro at the back gate and on the grounds.  Nothing phased him.  Not the kids running around, not the flags flapping in the wind, not the water pouring off the tent roof, not the garbage trucks, or wild horses, or anything.

His brain is sound - he just needs some time on the job.

If you follow us on insta (@cfantonelli) I'm doing a better job of frequent updates... but I will try to blog often enough that I don't forget the (fun) details.

I managed two iPhone videos on the first day- his second round in the Lows, and his first Pre-Green round.


The Low division had almost 80 horses in each round, and even though they split it into two sections, we missed the ribbons (though clearly the round with a stop was a throw away..).  However, He managed a 3rd and an 8th in a pretty lovely Pre-Green Division of 14.

I was (OBVIOUSLY) thrilled to have some satin to commemorate his first foray into Hunter Land and promptly took all the pictures and hung them proudly on the tack room wall.

We ended the day with smiles all around, excitement about what's to come and a slight sunburn on my forehead because I am not an adult and cannot keep my face covered...