Well, there's nothing like a little drama and heartbreak to reignite that little blogging voice inside me.

The 2019 show season was rough before it even started - with Quiz suffering an extremely complex fracture to his lower pastern (P2) before setting foot in the competition ring.  For those who follow us on Instagram, you've seen the updates and photos - but as I've laid awake at night wondering if I made the right decision and wondering what exactly this process will continue to look like for us - I find myself turning to my keyboard to help organize my thoughts. 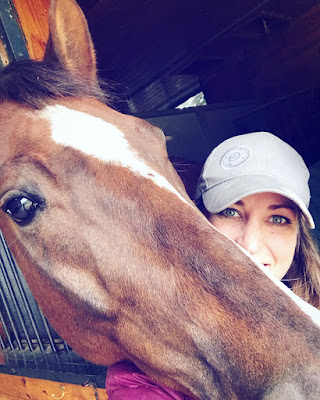 Before I get into the nitty-gritty of the break, here's a quick summary of Quiz's last year:

2018 was one for the books for Quiz.  He started the year in the 3' Green division and was insanely consistent.  At the big WCHR show at Thunderbird in May, he swept every class.  He entered 4 derbies during the season and won three of them (placing 4th due to a crappy trot jump in the other).  At Zone Finals we bumped him up to 3'3" and even though he was showing indoors for the first time, he snagged Reserve.  To end the season, we headed south to Cali where Quiz was champion in the 3'3" Green, Champion with me in the Low Adults, won the $1,500 under saddle challenge and also took the crown in the $16,000 Derby.  It was insane.

Then we came home, buckled down on our flatwork and prepped for a debut in the 3'6".  We decided to campaign in the Conformation Greens and even learned how to model (and jog in hand politely).

When we loaded up for HITS Coachella, I was brimming with excitement to see what Quizzy would bring to the table in 2019.

But, that was all interrupted.  After a great day of schooling, before we even jogged in for the Model, Quiz had an off step in a trot departure and shattered his P2.

If there is such thing as good luck - we were fortunate to be at a massive show facility with a great vet on site.  Quiz's leg was stabilized, splinted and x-rayed in a matter of minutes from the onset of the injury.

I was speaking with a surgeon within the hour, discussing the films he had already reviewed and the viability of surgical repair.  I called my insurance.  I called a trailer.  Quizzy hopped up into it and away he went to see what could be done.

The first vet to see him did a wonderful job of setting my expectations - I'd likely have a pasture sound horse, or alternatively we could put him down.

Then, the surgeon initially offered a much more optimistic prognosis, suggesting that he could even return to the Hunter Ring if all went as planned.

However, after a pre-op CT - the prognosis was adjusted due to increased detail of the break.  The CT showed that fractures extended all the way through the P2, and broke out into the coffin joint space.  The concern with that being that a roughened edge would produce arthritis that would either be just a little uncomfortable or possibly catastrophic.

I only had a minute to process the new information from the CT before I needed to make a final decision on surgery and whether or not I still deemed it appropriate or fair. 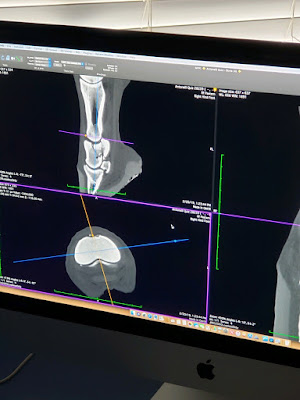 To be candid, my biggest concern wasn't what I would do with a 6 year old pasture pet (though that's horrifying), but rather that I was going to put this poor baby horse through a difficult surgery and miserable recovery only to fall victim to complications.

If I was going to lose him, I wanted to lose him without making him suffer on account of my emotions.

Thank god for my barn family, who was standing by me while I was on the call, trying to read my face and offer what support they could.  Ultimately, I opted to proceed with surgery.  The surgeon thought it was still a reasonable procedure - and not fueled by heroics.  I took comfort in the fact that insurance would pay for a bulk of the initial cost, and if we needed to make a different decision, we could always reassess day by day.

So we did.  I hung up the phone and waited for the call 10 hours later that would confirm Quiz was out of surgery and was on his feet again.

It felt like forever.  There maybe have been wine.  There was definitely a lot of tears.  And thank god it was girl scout cookie season because there were a LOT of thin mints.

The initial report from surgery was fairly good.  The bone fragments lent themselves to being screwed back together.  Soft tissue damage was minimal (probably because he was walking and was able to pull up immediately).  Quiz slept longer than normal in recovery (probably due to the fatigue of the day) but he got up successfully on the first try without damaging his cast or other limbs.

The hope is that arthrodesis (or fusion) of the P1 and P2 will stabilize the limb.  This process is supported by plates and screws binding everything together.  Quiz now has two large plates and (many) screws helping to set everything in place. 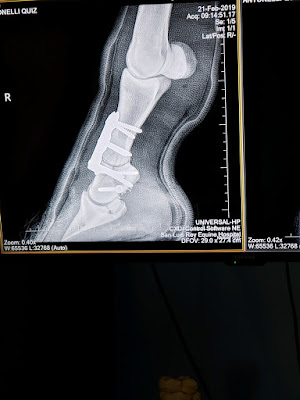 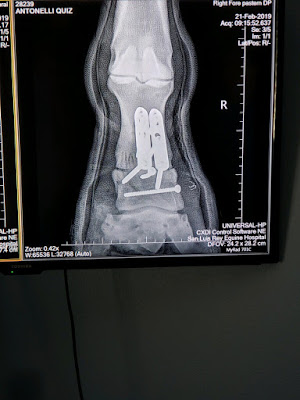 Additionally, several pins were placed at the top of his cannon bone which actually protrude from his leg and "rest" on his cast, helping to relieve the injured limb from some of his weight. 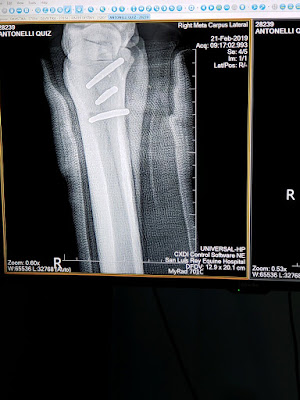 So begins recovery… It's a long road (one I don't entirely understand yet) but I am trying hard to take it day by day, and allow myself to be optimistic while understanding all the risks and outcomes that may still befall sweet Quiz.

Thanks to everyone for their outpouring of support.  I am fortunate in never having dealt with an injury of this magnitude or complexity.  To say it has been educational is an understatement - and I will try to share as much of this adventure as I can.