Adventures on the Fenceline & in the Creek

I feel like I've been starting every post with a "my how times flies" but it really feels very true.. INSANE.  No idea where my life is going.

But, back to the pony.  My trip out last week was fantastic, as usual.  P looks like a woolly mammoth and autumn at the farm is just stunning.  The air was crisp, colors were gorgeous, the mountains were snow capped and the ponies furry...  Not a bad place to spend the day.  I could do with an extra 10 degrees of warmth, but the weather was nothing that a constant supply of hot chocolate and some hand warmers couldn't contend with. 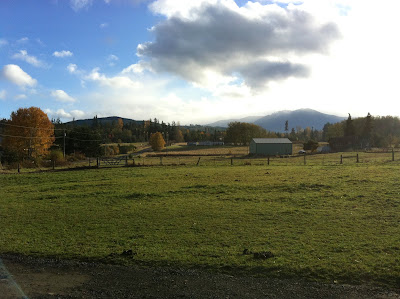 Maisy was my trusty co-pilot again, although she acted like I was taking her to a torture chamber and demanded to ride in my lap the entire way, lest she quiver and pant incessantly.  I had visions of a Brittney-style-tabloid-shot... "reckless owner endangers life of puppy.. travels unbuckled in lap!" But Maisy managed to not squirm so I figured she wasn't putting either of us in any increased peril....
M-dog stayed in the car (and her sweater) while we saddled up for our first ride of the day.  I grabbed big 'ol Wendy, Cowboy Man took P and another owner was on her adorable hunter-turned-trail horse who's trot is beyond droolworthy.

First order of business was to head to the back of the property and work on the fenceline.  Cowboy Man said that he's been working P on the property more and more, which is great (cause it's convenient), but a little tricky since the herd is wandering at large as well - which provides pretty stiff competition for P's attention... He said so far she had been handling it well, and expected her to continue to do so today.  (good for the mare).

we trekked over a bridge and through the fields to the back pasture/woods area.  The herd was at the front of the property grazing, so their impact on the horses was minimal.  I did notice P and Wendy "checking in" a lot more than they do out on the trail... A few whinnies, pricked ears, and attempts to look in the general direction of the group.. but nothing more demanding than that.  Once we got to work we basically asked the ponies to walk, and whoa based on our breath (like I did with P on the ground before) and wait patiently before walking off again.  This was easy as a group, but more challenging as we asked the beasts to walk off or wait away from their buddies.   The old hunter was a very good girl, P was surprisingly responsive and Wendy.  Well, Wendy was not amused.  Wendy did great when we were the first to leave... but did terribly if we were the last to catch back up to the group.

Did I mention that Wendy found herself at the farm after she taught herself to rear in order to get her way?  Well she did.

Something Miss Big Mare was keen to try again rather than stand calmly for 30 seconds away from her friends.  I must say, as much as I've enjoyed my nice long uneventful trail rides with W, it was nice to have to work a little and really feather her lightly with the exercise (however simple).

W tried a few little crow hops, and we backed all over the field in an attempt to not stand still, but eventually we got to a nice calm place where she was willing to indulge my requests of wretched stillness.  Cowboy Man had a good go with P, she was a little jiggy, and backed herself into the fence a few times, but no explosions (yay) and good progress as we worked longer.  Also, I know I mentioned it in my last (mini) post, but CM was riding Miss P in a rope halter.  with a leadrope tied to it.  Uh yeah.  NO THANKS.  but in all honestly, she was good.  I guess I'd probably be more comfortable than I give myself credit for with the halter, since P doesn't exactly "bolt".  The issue with her isn't sensitivity, it's being able to accept "pressure" from her rider.  SO the halter thing kinda makes sense I guess.  Keeps her form feeling boxed in, but still allows some nose control... something to think about going forward...


Anyway, after mastering the walk, we moved on to some trot work, still asking to go, then whoa and wait a bit.  Wendy was fussy, but we worked through it :)  P was a star and was more than happy to move forward a bit...

After about 40 minutes, the beasts got a break and we got to warm up a bit over lunch (which was an absurdly delicious pulled pork sandwich... )
When we finished with lunch, the beasts got pulled back in so we could load up and head to another piece of property to play in a creek.  We had four horses going.. 3 of them large, wide-butted things that take up half of CM's stock trailer.  BUT since P is starting to work with the herd more and is accepting of them moving in on her at meal time, CM decided to see how she would do in a tight trailer.  Big boy number one, and medium boy number two loaded up front in the trailer, while Wendy loaded in the back, leaving a shred of space for P to work herself into.

The second Property was just around the corner and consisted of a gorgeous giant meadow along with some nice woods heading down to a creek.  The creek was not... roaring, but there was a good couple feet of water which was more than enough to make all the ponies leery of putting their toes in.  (rightfully so, it was FREEZING).

Wendy wanted to investigate a bit before sliding her giant self down the bank and into the river.  She was not pleased with the rocks, or the wet, or the cold.  But she went and stood semi-happily while the rest of us waited for P to get it together and get in.

P was, to put it nicely, not interested.  I can't tell if I blame her or not.  I cant think of an intelligent creature that would have looked at the steep muddy bank, cold rushing water and big slippery rocks and though "OOOH, me! Choose me to get in that!!"  So, I give her a little credit for her skepticism, but then she lost some points for style.

Especially because this was not P's first trip to this creek.  Apparently upon her first visit she plodded right into the water and started playing with it.  This time, she was wise to the situation and refused to approach the bank.  Cowboy Man kept her nose to the water, which meant P could back up all day long, but under no circumstance could she turn.

I finally wrestled my phone out of my pocket to take a few pics, but by the time my numb fingers could take pictures, I got one, blurry picture of the creek, and one shot of P after she backed halfway home from the creek.
A few minutes later, P gave up and hopped in.  She immediately set to drinking/splashing/playing with the water and insisted on getting me wet (grrrr).  We were starting to lose sunlight so we rode up the creek a bit, splashed in different parts of it, then made our way back to the trailers.

Cowboy Man did make a point of commenting on how sure-footed P felt on the rocks, which just continues to call into question how much Wobblers this mare actually has... but that is a philosophical question for another day.

Today is a day for hugging ponies, being thankful for their many lessons and throwing some elbows at the grocery store in order to get my hands on some basic Thanksgiving Day supplies.

Gobble Gobble everyone! Enjoy your holidays!!
Posted by Gingham at 12:43 PM