I'm behind on posts (and laundry.. and other basic tasks) but such is life with a baby I'm told.

Gus has been doing so well at his new home that I finally felt comfortable with reviving my earlier conversations with the Therapeutic Riding Center about potentially using Gus in their program.  Typically they only use horses they own outright, but I guess they have from time to time also leased appropriate horses, usually from staff members or established volunteers.

The process of being approved for use is fairly rigorous.  There's an initial interview of sorts, followed by approval by their executive committee, followed by a 30 day trial, followed by a final vote of yay or neigh (lol) before a horse gets incorporated into use.

So last week we arranged for his first interview which would include members of the staff watching me ride and videoing, then a member of the staff riding, and finally testing Mr Gus with some program like challenges.
Gus was a great boy for me (no surprise).  He felt a bit stiffer than he has, but was still steady and very happy to tootle around.  We showed them our best walk, trot and canter complete with work on the contact as well as plenty on the buckle.  True to form, Gus was steady, happy and reliable.  Finally, because it's so hard not to play with Gus' buttons, we did some lateral work, flying changes and halt/canter/halts.  (so FUN). 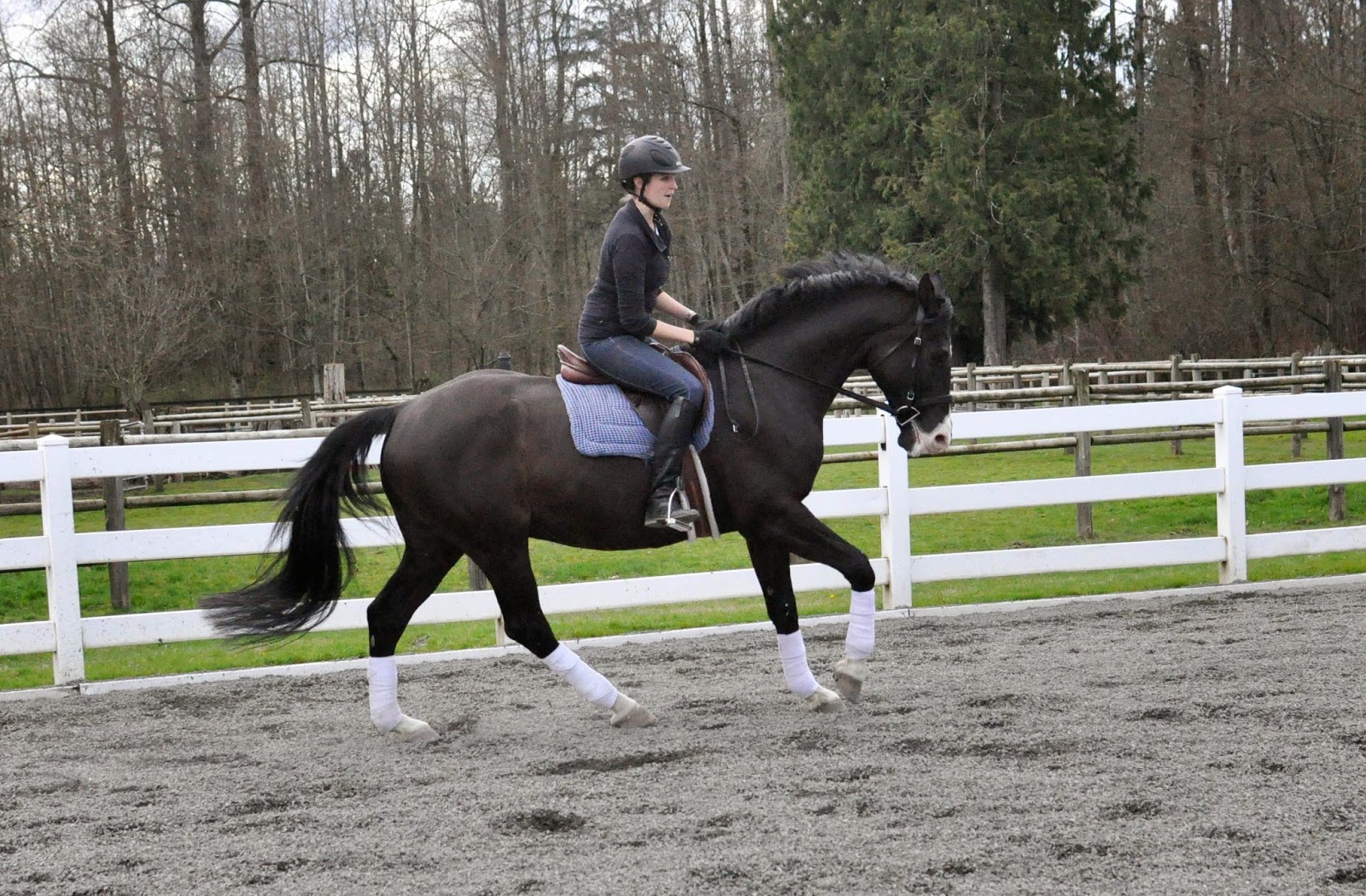 When their staff member got on, Gus didn't bat an eye.  He stood still at the mounting block and walked off on the buckle when asked.  After about 5 min of walking and trotting, his rider politely asked if she could borrow my spurs (oops) as Gus was slowly getting lazier and lazier.  (his signature move)

Once she got the (tiniest ever) spurs on, Gus offered some lovely canter transitions and worked like a gentleman.

The next part of the interview involved attaching a lead and asking Gus to walk and trot around with both a leader and a rider.  Gus was perfectly pleased to do this.  Then they added a third person who represented a potential "sidewalker" who would offer support to some of the riders during their sessions.  Gus thought that he had just accumulated extra friends and was perfectly willing to walk around with a crowd.

They simulated some of the "spookier" things that volunteers inadvertently do (falling behind and running to catch up, dropping the lead, waving arms... etc).  Also the rider offered some tests such as falling on his neck, leaning off one side, shaking the reins, kicking, shouting, etc).

Gus was not concerned.

Finally, it was time to test his interest in some props, so his rider got off and out came a bucket of toys. Initially Gus was convinced that said bucket would be full of treats (naturally), so he was moderately disappointed when his panel of interviewers pulled out a big plastic ball to throw around.  Gus gave it a hairy eyeball, but kept his feet on the ground and watched skeptically as the ball was tossed and rolled and passed around.  After a few minutes he was perfectly willing to let the ball roll into his feet, or get tossed into his neck.  None of the other toys (rings, stuffed toys, etc) caused him any stress, though he continued to inquire as to whether or not each item could in fact be consumed as a treat.

After a few more minutes of exploration, the interview was over and Gus was told that he would be hearing from them soon.

Well, the big man got a positive review and was approved for his initial trial period which actually starts today.  During the trial period the staff basically replicates the environment and processes that Gus would experience as a program horse.  He will join some of the group sessions (with a staff rider), walk around the property and work with some of the therapists and get poked and prodded and tacked as though he had clients working with him.

After 30 days we'll discuss whether or not they think Gus would be a good fit, and if he is, we'll talk about options.  I'm not ready to let the big guy go entirely, so I think we'll be looking at a lease, maybe a partial lease depending on his workload.  Ultimately it will also depend on how much M2 wants to be using him and for me... if Prair is back in work or looking at a longer layup.  If Prair continues to be out of work I may need Gussie for some good ol saddle time.