Remember when I said....

Remember when I said that I "didn't need much" for this horse?

As though that could stop me from talking to my bff's at SmarkPak pretty much every day.

And yes. Even with Christmas right around the corner.. I am just flinging my visa at anywhere I can find someone willing to sell me a leather good.  One of the drawbacks of a decidedly not-horsey family, is that they are unlikely to stumble on to beautiful or random Equestrian Accessories on their own.  So unless I hand over a legit middle school wish list with brand, size and color specifically spelled out, I'm usually on my own for horse-related acquisitions.

So far I haven't splurged on anything all that sexy, fabulous, or really anything that is super exciting for The Boy to gift for xmas.  (well, okay, maybe the totally unnecessary shirt I bought myself form Callidae, but that's different).

I realized that Mr. Man needed his own set of pillows and standing wraps.  So I got some.

I had some leftover Personally Preppy monograms (not my favorite source of monos, but that's another post entirely), which I figured could get ironed onto some fresh, fluffy, not yet manure stained pillow wraps, and then for the first time I experimented with having SmartPak embroider some standing wraps.

They have an option now to have the "tail" of the wrap personalized instead of the Velcro end which is awesome, because as OCD as I am about my wraps, I almost never get them perfectly square and I'd drive myself nuts if there were uneven monograms at different angles on all four legs.

But really, wraps and pillows... not so bad, right?

Well then I started hunting for a girth.  I thought about getting another TSF, but Windsor is built like a normal horse and so far saddles on him haven't had an issue with slippage or shoulder clearance since he lacks the giant-prair-shoulder that caused problems for the mare.

A few rides in, I'm also learning that he sweats like a monster under his girth.  So for the first time I am experimenting with a synthetic "breathable" style.

"Hi Smartpak? send me more of your stuffs."

I'm trying the SmartPak Breathable Girth .  I think there's a 65% chance I'll hate it and miss my plain, leather girths, but I'm feeling remarkably open minded.  Mostly I'm  irritated at the extra 45 minutes it takes his armpits to dry out so I'm willing to try anything.  (boys are gross).

Well, today I took Prair's fancy Edgewood reins off my bridle because they are so long that the buckle nearly hits my toe when I have my reins shortened to where they are supposed to be...

Aside from the length looking silly, I have visions of me falling off and then my toe getting caught in my reins and that is the stuff nightmares are made of.

So for now I'm riding in my favorite original-Pia reins which I adore, but don't totally match my bridle and definitely won't pass the Hunter Princess test in the show ring.

Feeling inspired by SprinklerBandit's recent post on her bridles, I tried a quick eBay perusal to see if there were any dark CWD raised reins available, and when there weren't, I just bought them outright for more than I ever want to spend on reins.. (but still less than those damn Edgewoods).

What else have I bought randomly? ... oh yeah. New breeches for me, since some Piper's were on sale and I've never tried them... hopefully all you guys who swear by them are on to something.

And then that brings us back to the Callidae.  I really love the look of their stuff.  And I adore finding new brands that have their own signature style.  The Hunter Ring is so boring.  I love the tradition of it, but I also really like finding subtle ways to have some interesting details.  Right now, Callidae is scratching that itch.  I ordered one of their practice shirts to see how the fit runs and if I like their styling.  But assuming I do, their show shirts will be at the top of my wanty list for show season.
Then, because my Visa wasn't totally on fire yet, when I was on Insta I saw them post a really beautiful belt which just so happens to have their signature "C" on the buckle, and for those who know me outside of boggy land, "C" works for me too. 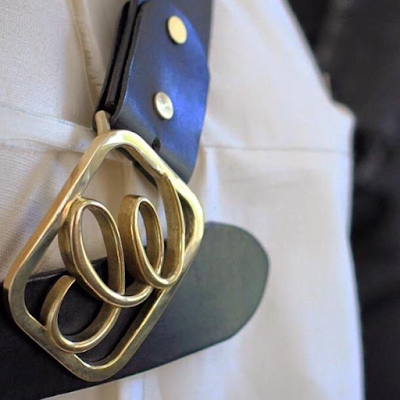 I've been having the hardest time trying to find a belt that I love for my breeches.  I have a weird aversion to fabric belts, and I shy away from anything that's too conspicuous, like the TS quilted belts, or even the Spur belts that have found their way into every arena.  I love the simplicity of this design.

Basic, clean, but still a tad refined and distinctive.  Fingers crossed I love it as much in person as I do in a well shot Instagram photo...

Going forward, I'll be keeping my eye on this brand.  It's expensive, but the collection is wonderfully curated. I am slightly obsessed with their throw blankets, but I haven't figured out a way to justify that particular splurge yet...

I think that brings us to the end of the unnecessary pre-holiday tack binge..

Well, aside from the small matter of that saddle on order... but again, that's another post entirely.