I swear I'm almost out of things to say about the show.  Almost.

Saturday was my last day of showing (class schedules are weird down in Cali..).

With both flat classes out of the way, it was a lighter day with only two Hunter rounds and a single Eq.

Sadly, we got moved to yet another sand ring, so no more big fun field, but we made do.

What was so awesome about the big field (aside from being pretty) was the fact that I had fooooorrrreeeevvver to (slowly) think through my checklist in every corner.

straighten
forward to the change
balance up and back
sit and feel the hind leg
soft arm
find the right hind
lift his frame
annnnnddddd... go

When I'm in a smaller ring I tend to jam all those things into like... two strides and I get stuck, and a tad frantic and end up either flat, or really underpowered out of the turn.  Mentally it sounds more like this:

So goal #1 was to keep the mental (and physical) spaces in my process.

It went pretty well.  Better than any of our other rounds in the sand - which was really encouraging.

I still sat back and pulled into the judge's line (oops), then had a hard time finding the right balance since the ring was pretty aggressively domed.

At one point (to the single oxer RIGHT in front of the judge) we were cantering up the diagonal (literally, up) then crested and started cantering down the hill and I had this moment of "wait, what? where'd my balance go, oh shit - where'd my distance go!?"

Between rounds the only thing I was reminded of was to balance UP and stop planting my hands.  If I could just manage that, everything else would smooth out.

With the exception of the 6, where we still ran out of room, I felt awesome about my last trip.  I kept Winds' balance a tad higher and his step a tad more open, and everything just worked out better.  Still some weird distances, but when he's up - he can get out of them much better.

I ended up with a 4th in my first round of the day, and a FIRST for my second.

I squealed.  Like actually squealed.  And when I got to watch the video for the first time I had a smile on my face because I feel like we are starting to look like a nice pair, not awkward middle-school-dance-partners.

Windsy got a nice long break and hand walk before he tacked up one last time for Eq.

He was not enthusiastic about coming out of his stall (again) and he was for sure a bit sluggish in the warm up.  We literally jumped two jumps, did one lead change and went in.

No two stride was set (thankfully. We need to work on those), but still some rollbacks and interesting angles. 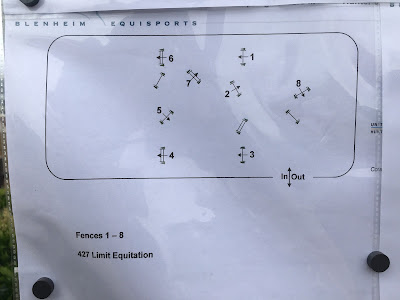 I knew that (for me) the biggest challenge was going to be getting straight in our rollbacks, and not grinding my canter down to a lope in order to be tidy.

My plan was to establish a bigger canter and plan for some longer options in the rollbacks.  I think this was a good decision since I'm still really focusing on not letting Windsor get too up-and-down in the tighter turns.  It felt smooth and manageable for where we are in our partnership.

We had a late change in the first rollback (I don't think he had a clue where we were going, but neither did I, lol) and a stiff change between 7 and 8 at the end, but ended up riding to the last fence well.

Even with a few bobbles, I was really, really proud of our ride.  There's no way we could have accomplished this our first week, and overall I really felt like I had a much better understanding of where we are.

The first week of showing, it felt like when things went wrong,  I literally wasn't sure why, or how to fix it.

By the end of the second week, my feel for Windsor improved so much that even though we were still making some (not to subtle) mistakes, every time it happened I at least knew why, or how we got there.  "ooohhhh right, my hands" or "oooh right I tipped" or "oooh right, not quite a big enough step"

Much better than feeling like I had no idea we were leaving a stride out of the line until we had.... already left it out...

We even managed a 6th for that last Eq round - which is a ribbon I for sure made a note on the back of.

Windsor got a well deserved mash before I took him out one more time for a Prom photo before going home. 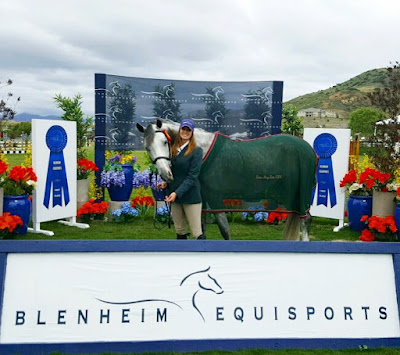 Finally, after packing up all my tack and shoving most of my dirty show laundry in my trunk (lol), I poured myself a well deserved glass of wine (or two) and enjoyed watching one of our juniors go around a few more times before I hit the road for home.