By Friday, Winds was back to his (mostly) normal self.  I bought him some new electrolytes, made sure he was taken out to a big field where he could roll, and hand-walked his legs off.

The result was that on Friday afternoon for my rounds, he felt great to me and we opted to keep him in the National Derby.

The course looked good, the field was gorgeous and there was a COMPLIMENTARY WINE TASTING to keep everyone entertained (and happy) during the whole class.  (seriously brilliant). 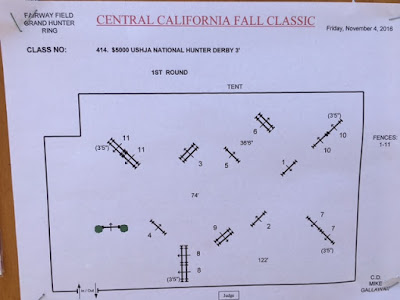 Nothing worried me about round one and I was glad to see the course built up to height.  Winds needed something to catch his attention and I hoped this was it.

We were 20th to go out of 40, which gave me plenty of time to watch some trips before setting jumps for Winds.  The plan was to carry some pace, take all the high options and hope that the judges liked him a bit more than they did earlier in the week.


Given all my doubts from the Pre-Greens, I was extremely happy with a 85 + 4 for an 89.  It put us into 3rd place, and held 5th by the time John French got all six of his rides through and the Classic Round was done. 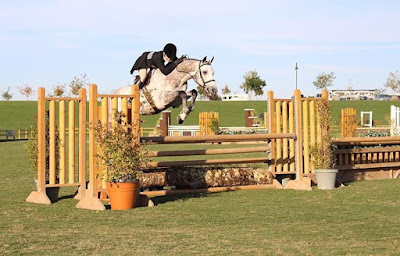 Looking at the roster of entries, this was legitimately the first Derby where I wasn't confident that we would make the Handy.  There were some gorgeous horses, and unless Windsy decided to jump like old-Windsy, I really didn't think we'd make the cut.  So, to throw down a nicely clean round and be rewarded by the judge's was not only a relief - but really, really exciting. 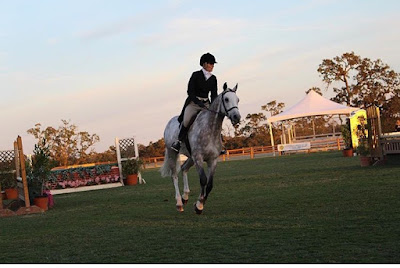 The sun and heat of the show tricked me into thinking it was still summer (and not November), so it wasn't until the Classic round was drawing to a close that I realized how dark it was actually getting for the handy. 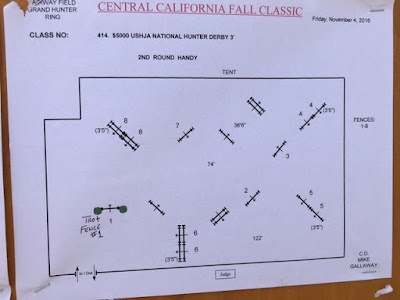 The track was interesting.  A trot fence immediately in front of the in-gate was an early question, along with two opportunities for some TIGHT slices.   The first option was to slice the trot jump (actually much closer to the in-gate) and go in front of that un-used vertical on your way to #2.  No one attempted this until about halfway through the round, then almost everyone followed suit. #2-#3 rode straight forward, then #4, #5, #6 had three high options in a row that weeded out the horses not quite capable of holding their balance together for multiple 3'6" fences in a row (the scopey ones had no issue, and it provided a nice place to ideally show a lot of brilliant pace and BIG jumping efforts on a large step).  #7 was straightforward, with a possibility of a tight slice and return to #8 for your final high option.  No one opted for the final slice, and while it looked real tricky, I was hoping someone would show off.

Because a few riders had multiple horses (cough, Frenchie, cough cough).  the whole round was out of order which made keeping score hard.  Windsor rode back 10th, and had a nice trip.  They took the first inside turn, and laid down an otherwise correct round.  Nothing crazy, but really lovely.  I swear in person his exploded over the oxers like crazy - in the video it looks like a normal jump.

I thought that the base score of 82.5 seemed low relative to the other scores tossed out, but since Windsy held his brain together and didn't bat an eye at the low light or crazy shadows - it was enough to move us up to 3rd overall.

The thing that's crazy impressive to me about this result is that Windsor has yet to place below third in a Derby.

He's for sure not the fanciest horse in the field, but he is brave, and he is consistent, and he has yet to say no to anything he's seen on course.

That said - I can see where we are leaving some points on the table and I think that as his skills continue to improve, he'll be even more fun to watch in these classes.

I nearly had my trainer talked into doing the $25,000 International Derby that closes out the show this week, but it would ruin his eligibility for the First Year Greens in 2017, and as much as I can't wait to see him take on those big courses - I'll just have to wait.