It seems to be a theme that I manage to delay blogging about a show for 2+ weeks - which results in summaries like "we went to a show"  and "we did some stuff."

Which is too bad, because as stuck as I've been on updates recently - I still totally value having them and the ability to go back and review them.  So I'll try. 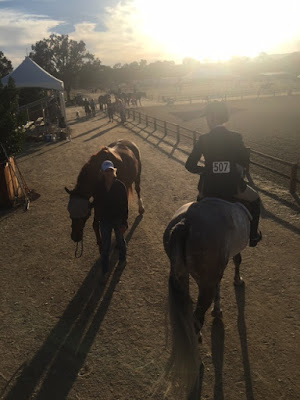 I enjoyed our two weeks at Paso Robles.  The park was great.  Footing held up well, staff was plentiful (and friendly!) and the schedule was realistic and on time.  Those things alone make for a pretty great few weeks playing with ponies.

Winds, however, was not his brightest shiniest self.  He wasn't awful, but I get so excited about showing him off that when he is a tad stiff or lackluster I get bummed out.  Not because he's bad - or even that he necessarily does poorly - but I when I know he's got more in there I end up a bit let down.

The second week saw much stronger pro divisions.  Folks made it back from Kentucky - and all the Green divisions about tripled in size.  So it was great to have some good competition and also see some new horses in the ring.

Winds did fine in his Pre-Greens.  Not horrid, but not spectacular.  No major mistakes, but  he was jumping out his right side a bit and that killed us in the stiffer competition.

My rides were good.  We had one of our smoothest rounds to date and managed a blue ribbon in a big class of 25.  The second day our schedule got a bit off and I ended up going in on a very short warmup.  Winds wasn't quite working over his back yet and was surprisingly fresh in the ring which made for some stiff and jarring rounds.  We still pulled ribbons, but not great ones. 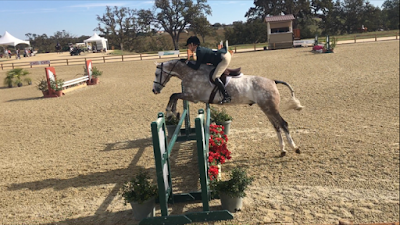 Below is the blue ribbon round.  I high recommend watching solely for the incredible commentary of one of our resident juniors.  She's rad, hired to provide color commentary at all shows from now on.


(FYI, when I went back in for my second round I promptly ate the first fence RIGHT in front of the judge, and killed our laid back vibe.  dammit).

For comparison, here's one of the rounds from the next day. Winds was still a very good boy here - Mostly I felt the tension, but where you see it come out in the video is in a few funky distances.  He felt a little sticky to my leg which resulted in him not moving up subtly when I asked - then all the sudden lurching in the last stride.  It was all a bit rough.  But I will say that we didn't have one sticky change all week - so that's a HUGE success in itself.

Also, a clip of our Under Saddle for archival sake (very boring, not recommended).

We managed a respectable 4th in a class of 12 with a few REALLY nice movers.  Winds didn't hack his best.. I could tell he was tired, as the "downhill" side of the ring felt quite heavy and difficult - when in fact I know it's only a 2% grade.  Couldn't quite get him up and pushing as much as I like.  But he's a cute nugget.

All in all a great trip.  I'd revisit a West Palm show at this facility without hesitating.  Good food (and wine) and lodging and weather all add up nicely.

My only real complaint? TARANTULAS.

I don't do spiders.  and I really don't do well with big ones.

and the dressing room.

nopenopenope.
Posted by Gingham at 11:27 AM