Friday afternoon we went to grab the mare, and bring her home for the holiday weekend.  I mentioned that my vet reported that Pia had a "stormier recovery" and "bruised herself" a bit in the process of coming out of the anathesisa and also experienced some (not uncommon) seizures related to the myelogram.

He was pretty casual about the "abrasions" she gave herself while seizing, which made me think that they couldn't be anything that some corona ointment and extra lotion wouldn't have soft and happy within a week... boy do I wish that was the case...

When I got there, it was pretty obvious that miss mare was not thrilled with anything and mostly just wanted to sit in the stall and sulk.  Remember last time I picked her up and she was a pacing, puffing, sweaty mess??? She couldn't have been farther to the other end of the spectrum.. She nickered and finally came out of her corner and didn't seem interested in much other than resting her head on my chest and slowly munching on some carrots. 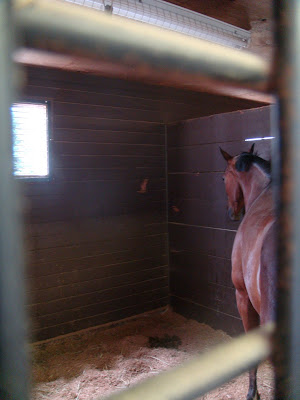 I took a quick once over to look are her "abrasions" and my heart sank.  While Pia's poll and neck were less goopy than they were after myelo round #1, her "rug burns" were 10x worse than what I was expecting.  Both of her knees looked inflamed and gooey, and the rest of her joints had bangs and bruises from what look like clipping herself with her own feet..

Here's a highlight of the damage: 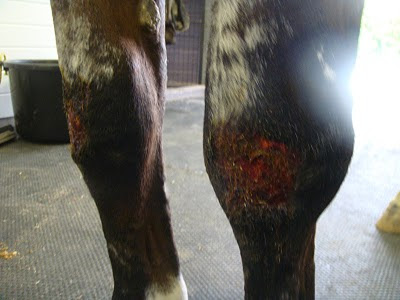 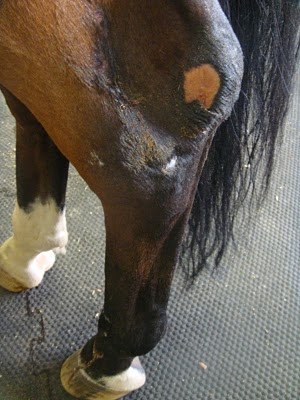 Significantly less bloddy (though equally hairless) hock, and the dripping evidence of a serious hoof smack on her pastern...
(There are a few other bumps and bruises, but not very significant ones... These are the ones I'm worried about.  For one thing, her knees are where she had skin grafts, and I can't tell how much of the "patch" has been removed, and I don't really know what that means for healing.  Her hock isn't that worrisome, it isn't pussing, it isn't hot and the joint isn't inflamed.  The clip on her pastern worries me a little because its still weeping and until yesterday it was hot and she didn't want it touched/dressed or wrapped.  P was favoring it when she was standing, but walking sound on it... )
Anyway, after some jaw dropping inspection of the gashes, I pulled P out and got her ready for her trip home.  It was a little difficult wrapping her since she was wincing away from any pressure on the wounds, but we finally got (decent) wraps on, or at least something that made me feel like she wouldn't contribute to the collection of bumps and bruises during our ride home. 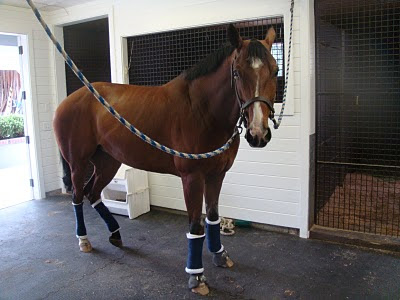 Sad mare with wraps - note the nicely favored left hind..
nono, i'm not freaked out at all that your resting that foot constantly...
I was feeling extra bad about shoving her into the trailer, so we experimented with removing the front divider to give her a little more room to spread out.  I didn't want her scrambling at all in the back on the ride home, so I figure the big girl could try riding in the front two stalls of the trailer.  The Boy had the divider out in about 3 seconds, and it looked viable (plus no sharp hinges bits were sticking out) so we decided to give it a go.
Mind you, at this point Pia was still acting like a Sad Sally complete with droopy ears and she's not at all acting hot or bothered.  SO, when I led her out to the trailer I didn't bother putting her chain over her nose (whoops).  I realized that I had left her head bumper in the trailer so I  handed P off to The Boy and darted to the tack room to hunt for her little hat.
Just about the time I was shouting "babe, where did you hang that up" I heard a "NO, Pia!" coming from the other side of the trailer and I poked my head around just in time to see Pia circle twice around Eric (presumably to test the level of control), before she immediately took off running down the long driveway (toward the road filled with cars, trucks and certain destruction).
The Boy maintained fairly good instincts in "hanging on" and I decided to be super helpful by shouting "don't let go of her!!" (which, in fairness reminded me of S's helpful "Stay on!" right before P bucked me off a few months ago..).
To give him credit, he did hang on, and although he was mostly waterskiing down the driveway (dear god do I wish I had my camera out...), he finally managed to let go with one hand long enough to smack the crap out of her neck to get her attention.
For the record, he doesn't get mad easily, and if he does get mad, he doesn't show it.  So I was pretty impressed when he stopped her, smacked her and backed her shit up for a few steps before bringing her back to the trailer.  Needless to say, the chain went on, and my sympathy for the poor-sad-mare declined significantly.  She, apparently, felt fine.
Thankfully that was it for shennanigans, and we had a nice uneventful ride home.  I'm not sure she noticed the extra room in the trailer, and I fully acknowledge that half the crap I do for horses is mostly for my own piece of mind, but I figure no harm no foul on this one.. 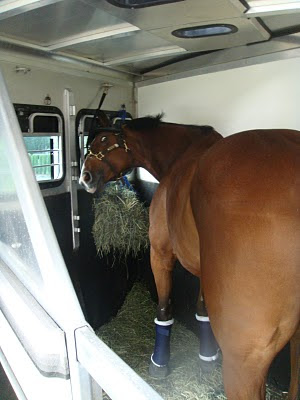 Mare says "oh, hei, how roomy..."
Currently we are back to our normal "time off routine" plus she's getting medicated goo applied once a day, with some gentle cleaning happening as necessary.  Since she managed to literally scrape every major joint, the amount of sawdust and random debris that is collecting in the sores is staggering.  She's got a week to show some signs of healing before we start worrying about her skin grafts, and everything else should just be a matter a time - assuming that we avoid any weird infections.  At least its sunny and dry at the barn.. so she won't be packing gross manure mud in there anytime soon.
Also.. we are awaiting the "results" of the second consult on the film (both the radiographs from the myelo and the video of her neuro test).  I'm expecting news on that today or tomorrow...  so I guess my fingers are still crossed.
Posted by Gingham at 11:44 AM