P goes to the Beach

A slightly elaborated version of my day with P last week:

When I pulled into the Farm, P was munching her way through some hay with the rest of the herd.  She seemed comfortable surrounded by everyone, and I was proud to see that she was capable of not being run off her food in the group.

It was also apparent that she has become somewhat of a YAK.  The mare who didn't even justify a body clip last year has grown a veritable yak-coat.  Which, I suppose means that her body is happy, healthy and mostly normal.  However, her ears look ridiculous (although warm) with 3" of pouf coming out of them... lol

Anyway, I made myself some tea and chatted with the farm hand before heading out to the field to find Miss Mare.  I was disappointed to see that instead of munching with the rest of the group, she had moved herself aaaaallll the way to the back of the field where she was gazing longingly at a gray arab gelding across the street.

It appears that this has become part of P's normal routine.  Eat.  Pine.  Eat.  Nap. Pine some more.  Sleep.

She is utterly convinced  that this gray gelding is her soul mate.  (what??). 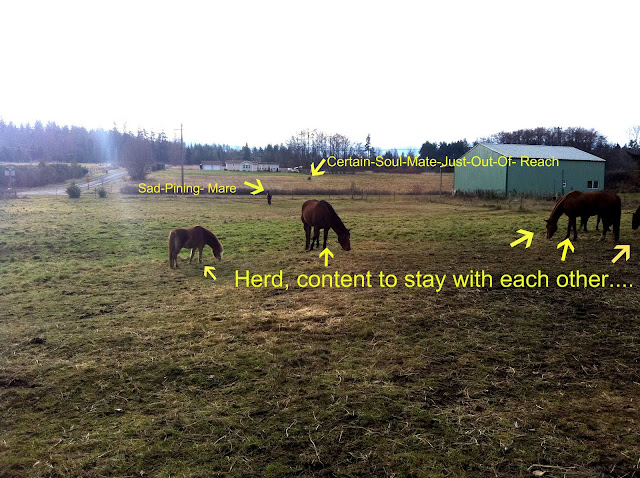 Anyway, after tromping out to get the beast, confirming that she is not a total Yak, I brought her in, chipped off some of her mud layer and got ready for our beach ride. 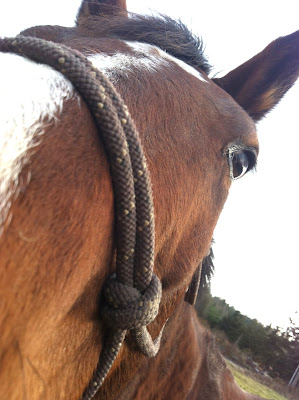 Although P has been to the beach a few times now, she still isn't totally certain about it, and her face in the trailer as we got there was priceless
I couldn't really blame her.  We specifically waited for low tide in order to have a bit more room on the beach, but that luxury comes with a rather aromatic trade off...
P was alert, but calm while we tacked up. She seems rather reliant on her buddies still, but as long as they are close, she allows herself to really relax and drink in her surroundings.  Herd-bound? yes.  But right now the theory is that she has to really learn to be in the herd (and not pine after the street-gelding) in order to get the sort of relationship skills that will help her trust me in the future...

Of all the things that were surprising to me during our ride, legging up (sans air-vest) from the ground, without help on pavement was one thing I never really expected to do on her.  Not that anything in that sentence is remarkable on its own, but they are all indicative to how much more relaxed and stable the mare is, along with how much my own nerves have quieted about her....

The ride was uneventful.  P took it like a champ.  Smelling scary piles of wood and seaweed, bravely putting her nose on anything that was questionable, and most importantly - Continuing to stride out and stay forward for the whole time.
I chose not to pick a fight about getting in the water, although I think I would next time.  I still wasn't totally comfortable in gauging how long P's current "fuse" is, but it felt like she was handling herself so well, I'd rather log a happy, productive ride, then worry about accomplishing too much.

All in all, I was thrilled.  Thrilled that the beast is happily progressing, thrilled to be on a beach with my mare, and thrilled to be able to spend a day doing nothing but patting my furry, mud covered beast.  It reinforced my current thought that even if P stays a "trail horse" (though I doubt she will forever), I definitely still want her to be my trail horse.  She's so cool :) 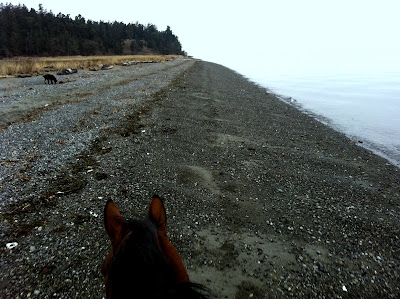