This has to be a joke.

I can't remember if I've blogged about this or not, so in my wedding addled brain, I'll just run the risk of repeating myself.. 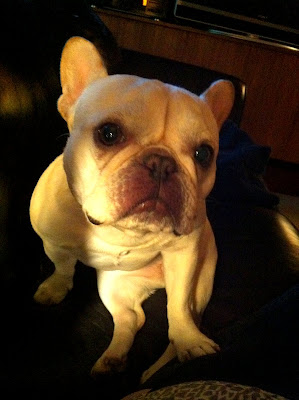 About two months ago I noticed that Maisy (the beloved frenchie) was favoring her left hind and really protecting it when jumping up and down from her couch.  No issues chasing her Frisbee, but when asked to do something she didn't want to (get in car, go out in rain, etc) the limp became rather pronounced.  It also increased with lengthy walks or extensive playing (not good).

Additionally, I finally picked up on the fact that M-dog was refusing to "trot" choosing instead to perfect her walk/canter transitions (at least one of my animals has??).  I became worried when Maisy flat out REFUSED to trot, regardless of our pace or her energy level.  That's when she hitched a ride to Sequim and talked to our vet about her little ham hock leg.  Vet gave us a referral to her favorite orthopedic vet over here and off we went.

I was lazy, so it took me a few weeks to book the appointment, but we had it today and I am currently still baffled at the current diagnosis.

Anyone want to guess? Bueller??

Of course at this point I'm a total skeptic, so I was peppering the orthopedic (and then the Neuro specialist they brought in) with about a ga-zillion questions, but it all came back to neuro.  As it turns out, Maisy's adorable "pointed toes" on her hind legs (she always points them when she sits, or stands.. it's cute) is actually a perfect example of disconnect in her hind end and a comprimised spinal cord.  Since, as we learned in our earlier adventures with Miss P, the bundling of the spinal cord has all the hind end stuff on the outside.  Ergo, it shows symptoms of damage before anything else does.  (ahhhhhhhhhhhhhhhhhhhhhhhhhhhhhhhhhhh).

Apparently however, this is common in Frenchies, and (unlike most equine cases) is often the result of something that is degenerative.  Most commonly, cysts in the spinal canal or malformed vertebrae that fall out of alignment are to blame.... WAH.

Either way, Miss Maisy goes in for an MRI tomorrow to see where exactly the spinal cord is damaged and what's causing the symptoms.

Since Maisy has pointed her toes like this since she was a puppy, I'm hoping that the stenosis is just the result of a crumpled bulldog spine and that the increased lameness in her left hind is a simple strain, sprain or slipped disc that can easily be managed.

Things we aren't interested in seeing include: cysts, tumors or turbo-bad arthritis.

You should have seen the look on my face when the neurologist tried to give me the "Wobblers 101" speech.   Thank god I was holding the pup, or I might have involuntarily punched him.

More tomorrow.  Fingers crossed for the puppy please....
Posted by Gingham at 2:42 PM