For all the crap that "men" get for forgetting important dates.. I am really giving them a run for the money...

I finally sat down today and filled out all of Prairie's Change of Ownership stuff.  I know it sounds like one of those simple little tasks that only takes a few minutes, but it was surprisingly difficult since it required transferring her USDF, USEF and AHA registrations to me, which incidentally also required me finding my USDF and USEF numbers which have been long gone for a while now.

You'd think I could just get a new number, but no.  Phone calls were required to get numbers, and that (as it turns out) was the big procrastination factor....  I feel like a dork making those calls at work (I'll blog at work, but I won't actually talk about horsey stuff out loud), and the few times I would remember about making the USDF/USEF calls when I was home, it was always way past closing time for those East Coast offices...

Anyway, just one of those things that I kept pushing from one to-do list to another...

But today was the day.  I wrote my checks, I stamped my big envelopes and I made copies of all the original certificates... which caused me to notice that the mare had a birthday (whoops) in April.. on the 14th.

Sigh.  I probably should have made her cookies, and given her an extra special birthday hug.  But I didn't.  Instead I probably made her work hard and for not nearly enough carrots... bad horse mom.

So, the BBM is now officially 7, (seven!) and having forgotten both P's anniversary in March and now Prairie Birthday in April, I am twice the bad horse mom I once was...  OOPS. 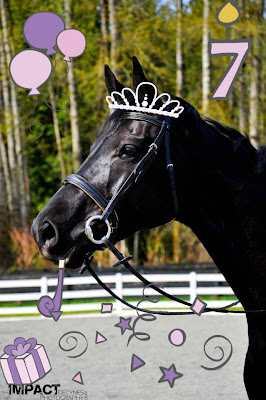