Everyone has been so patient waiting for this post, I apologize for being so tardy.  I don't even really have an excuse. I mean... It's not like I have all this fascinating content about shows, or tack, or anything-other-than-hand-grazing to discuss so really just a blogger fail. 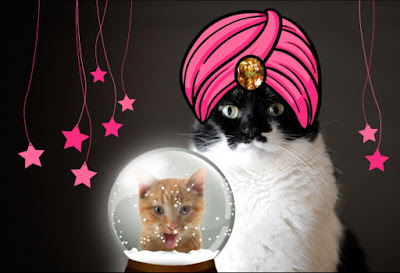 Last week, I finally had my long awaited appointment with the Animal Communicator (I've heard they don't like being called psychics..).  At the start of the call I told her that I was calling with regard to Prairie, a horse, who is a 10 year old black, Hanoverian mare.  Oh, and she's 17 hands.

That's it.  No description of our discipline, injuries, schedules, history, anything.  I suppose it's possible she googled the blog in the first 30 seconds, but it seems somewhat unlikely.

Anyway, so we began.  When I started to offer context for some of her initial observations, I was cut off and told not to tell her anything.  This being our first call, she really wanted to just tell me what she saw without any input from my end.  If I thought she had chops and wanted to get more specific in future sessions, I could, but no "helping" during this conversation.

So I shut up and started taking notes.

I'm not really too sure how to structure this post, so I'm just going to copy and paste my notes, somewhat reorganized into categories, and then I'll offer you my thoughts at the end? For those of you who know Prair personally (or have just read long enough to know the drama), some will resonate.


Feels like royalty.  Used to being respected in the herd, expects to be respected by people, friendly on her terms, like a cat.  Her kindness must be earned.


Loves me, though she doesn’t show it.. I exist to serve her. She likes being elegant. Thinks her job is to be exquisite.   Doesn’t want to hurt me.  Knows I want the best for her.


Previous trainer didn’t understand her and didn’t want to learn.  Likes her trainer now, knows she won’t get hurt. Appreciates the softness.


Someone pushed her too far too fast.


She has an intensity about her and she wants to do well at her work.  Strong work ethic doesn’t like to be wrong.


Important for me not to get mad at mistakes, but smile and stay positive.  The mad makes her panicky.  She needs to know it’s ok to make a mistake and she won’t be hurt.  I tense because I was given unrealistic expectations as a child and hate not being perfect.  So I have to change my response to mistakes first.


Someone in Germany was rough with her at 3.  There was a rope around her neck.  It hurt.  They jammed a bit in her mouth and hurt her TMJ, still tight on the left. She had pain in her neck and head for 2 months.  It was a man – 6’ tall, brown hair, light brown eyes.  He also rammed a crop into her neck – C5 vertebrae.


A Big Bay horse told her to put up with humans, and that doing what they want is easier.


She has had 3 significant owners. And I’ve had her 4 years.


She’s the third horse on the left.  And likes being in the center of the barn.


Two Bay horses in the barn adore her.  One is the Bay horse next to her, he’s very pretty and would take a bullet for her. She likes him too but doesn’t show it. Prairie worries about his hind legs.


There is also a Chestnut who likes her, but he is farther away.


Some issues in her teeth – upper right in the back.  Uncomfy.


Cardio is ok, she doesn’t think either of us are built to jump big fences.


I tilt left, and curl my toes (tight thighs) and sometimes am too far forward. The man who hurt her would tense his thighs and then get mad at her, that’s why she hates tension. She likes me to stay loose so she knows she’s not going to get hurt.


Injured her RF coffin years ago (like 5). All healed now.


Back is main physical issue.  She maybe slid in pasture (but didn’t fall) and then got almost cast, but when she got up was in a lot of pain.  Left rear leg injury comes from her back.


There was a shoeing issue in her RH 3.5 years ago. White line on her RH is different than the others, caused her to stand on her LF too much and caused soft tissue damage.