Thursday was another early morning (a theme for the trip) that would start a day of "second looks".  The offer on Gray Brad (1.40m Brad) was accepted, so we opted to return for a second visit to decide if we loved him, or were over him.  The other client had her offer accepted on pretty Bay Brad, and we had a vetting lined up for that afternoon which meant she could be present for any findings.

But we started the day with a return to see the cute unflappable 3 year old we had seen the first evening.  He wasn't a fit for either of us, but Trainer was hoping to get a better sense of him and see if he might work for anyone else in the barn.

He was once again, unflappable. and cute.  Great little mover and calm to the fences.  He'd make a great move-up horse for a kid, or a smaller Ammy I think.  Such a sweet personality - he deserves a good, happy home.

Then we were back on the road and off to see the Gray again.  (squee squee squee).  The resident trainer had to leave for a show, so we were sort of on our own, which was nice.  We had asked for him to be left in his stall in the morning, no turnout, no time on the walker, etc.

Going into it I figured when I legged up for the second ride I would either love him forever or be sorta over it.

My trainer got on first, and I had asked her to ride him like she would at home.  Lots of lateral work, lots of transitions, lots of chill time, etc. The concern was that he'd be a bit more "up" in his work without having his turnout, or being ridden first by his own trainer.  But the reality was that he was calmer. (perhaps because he hadn't gotten excited about big jumps?)

Then it was my turn and I took my time.  Got a bit of a mini lesson instead of just trit-trotting around on my own.  When we started jumping, I was immediately more comfortable letting him lock on to his Hunter-Gap-ish distance and I didn't pick at the distances as much.

Worked up to a small line, which was very easy.  The big challenge came when I tried to take the line off the short approach.  There wasn't enough space for me to wait in the corner and see a distance, and I was still tentative about carrying pace through the turn... so there were a few comedic misses, but bless the horse, he didn't hold it against me and still just trucked right back up to it.

The fences got put up a bit, and I got more and more confident.

Finally, I remembered I wanted to hack him outside and see how he was in the open, on his own, so we walked around the farm, and up to a (lovely) outdoor.

He was totally chill.  He flicked an ear at some of the people walking up the path beneath us, but he settled right down and I never had to pick up the reins.  We played a bit, then took a few videos under saddle for my vet to see since it was obvious I really wanted to name the puppy and take it home. 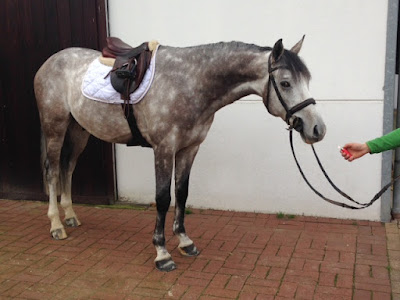 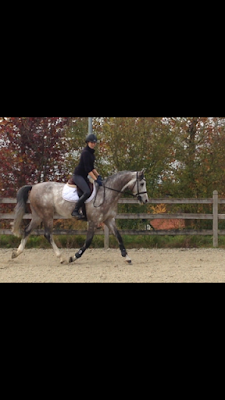 He's a cool guy.  The time spent on the ground and just milling around cemented my opinion that his brain is good as gold (I hope).  He seems like a solid citizen, and like he'll take to a Hunter job quite naturally. So.... we parted ways and headed off to watch Bay Brad get vetted...

Bay Brad was also a rock star.  In spite of the fact that he's four.  and a stallion, and it was dark, and raining and we were lighting the flexion videos with headlights from parked cars.... he was a chill dude.

He's going to be a really, really cool horse too I think.

After a long, slow vet process, we finally packed back into the car and got back to the hotel in time to snag a bowl of delicious pumpkin soup at the restaurant before turning in for a couple hours of sleep before we headed back to the airport for the long ride home.

A long ride home made longer by watching videos on repeat and making small offerings to the lameness gods for a clean vetting...

I hate waiting for vets.