This past holiday weekend might go down as one of my favorite Thanksgivings ever.. Mom added creamed spinach to her turkey day repertoire, the baby was adorable and playful all day, there was champagne a plenty and oh yeah.... WINDSOR ARRIVED.

I got the call at 7:30am on Saturday that Windsor was about 3 hours out.  So I shot out of bed, tried to maintain my cool and "enjoy" my coffee slowly, but I ran out of things to distract me, so by 8:45 I was out of the house and headed to the barn to twiddle my thumbs and watch lessons until he arrived.

The barn was unusually busy for a Saturday, and some of the ladies had prepared a welcome party, which was totally fun and let my inner Twelve-Year-Old-Girl come out a bit.

As I watched the haulers slowly back him off the ramp, it became obvious to me how much excitement and expectation I've been holding back.  I've allowed myself small celebrations here and there, but I think all of the unknowns of shopping for a horse like this really put some serious restrictions on my celebrations.

Is he really as nice as I remember? Did I get totally screwed in this deal? Has he been totally ignored eveer since they got my check? is he going to be a spooky asshole?

But as soon as I took over the lead rope, all of that reserved concern pretty much evaporated and I was grinning form ear to ear.

You guys.  I am TOTALLY IN LOVE.  Whatever shortcomings this guy has, I am going to be totally, and completely blind to them for at least the next 90 days.  I am smitten.

His tail is surprisingly luscious (which I had forgotten).

He is a snuggle bug in his stall.

He was easy to handle and parade around 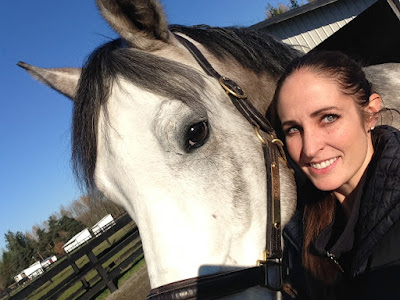 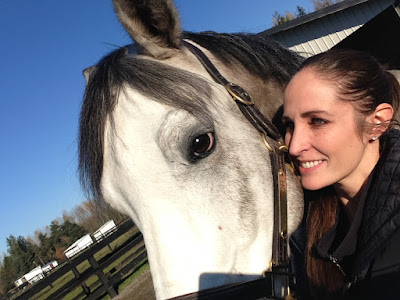 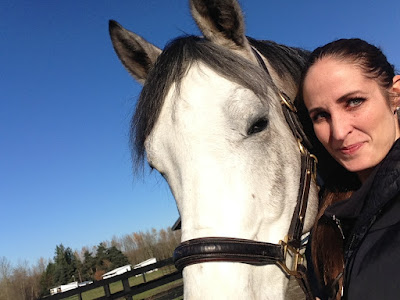 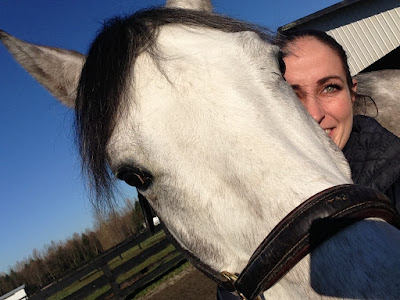 One of the ladies was kind enough to bring her good camera out and snap lots of arrival pics, which took the pressure off me for documentation, so I am lacking in immediate photo gratification, but I appreciated the ability to just enjoy the afternoon.

And the homemade creampuffs.

I hand grazed the little man for a few minutes when he first arrived before putting him into his stall, where he promptly checked my pockets for treats, peed, rolled, ate some hay and then pooped.

Which is a pretty perfect agenda for a horse that's been traveling since last Monday.

I let him unwind and relax for a bit while I chatted with everyone and caught up with a few of the boarders that I don't get to see very often, before I pulled Mr Man out for some grooming, inspection and... more cookies.

He seems to have hauled relatively well.  I don't think he dropped much weight, his temps are running normal and in general he seemed very relaxed about it all.  The only signs of a long journey are a few nicks on his heels where he seems to have stepped on himself a few time.  Nothing major, but still... I forget how easily blood shows on a gray horse....

Since he was so relaxed about life, I turned him out in a smaller paddock for a bit to let him stretch his legs, and after a few polite bucks, he settled right down and got busy sniffing every inch of his space.


I spent some time watching/oogling him and even did a little tiny bit of join up/liberty work (if you want to call it that) to see where his head was at.  Turns out his head is very motivated by treats and relatively interested in engaging with whoever is in his space.  He walked up to me every time I entered his paddock and politely followed me if I started moving around.

Eventually the horse next to him started to spin up, and Windsor started displaying some behavior more in line with a horse that had been cooped up for a week, and oh yeah... gelded really late... so I opted to bring him back in and love on him in his stall a bit more.

I know the new-unicorn-shine will wear off, but for now I'm reminded how much I've missed having something to ride, and the excitement of a new partnership ahead of me.

I can't wait to start working with him.

The plan is to give him a couple days to relax, then start him back to work on Tuesday.  I will likely let my Trainer take that ride and see what we are working with.  Plus then I can video (!!) and look forward to some lessons later in the week.