It's that time of year.... when I start looking at my calendar, panicking about commitments and desperately trying to carve out weeks for horse shows.

The biggest hurdle for me is that at a time in my life when traveling for shows is harder than it's ever been - our barn is moving towards a schedule with more shows "away" from home.

I understand why.  The facilities that tend to host our A/AA shows locally are either newly developed (and need infrastructure desperately), old and gross (and no fun to be at) or limited in size (and therefore class offerings).

That's not to say that the barn doesn't plan to go to any of our local shows, but the general consensus of our owners right now seems to be a preference for shows that are 2+ hours from home.

So for me, (and work and a baby) that means I have to be somewhat thoughtful about what shows we do plan to attend.  I wish I could pick up house and home and be on the road riding for two weeks every month - but alas, that Powerball ticket hasn't been a winner yet.

I also know that planning too far out with horses is tempting fate, and often useless since goals and schedules and availability are all constantly shifting.

Right now, it looks like Windsor will make his Hunter début down in Orange County at the Blenheim Spring Series.  Several owners have gotten fed up with Thermal (I don't blame them) so there was little enthusiasm to head for HITS again.  To be candid, Thermal is kind of a pit.  It's dusty, it's crowded, the staff is worked hard and has little time to be friendly and there isn't much effort put toward hospitality.  It's not the sort of place you take your fancy horses to sip on champagne and enjoy beautiful surroundings while feeling extra uppity.

That is to say - It's not Wellington.

Thermal is great for getting a lot of reps in, exposing your horse to crowds and insane flat classes and dust storms and long days.  It's also good for conning your family into joining you since the Coachella Valley has lots to offer the grandparents and golfers. 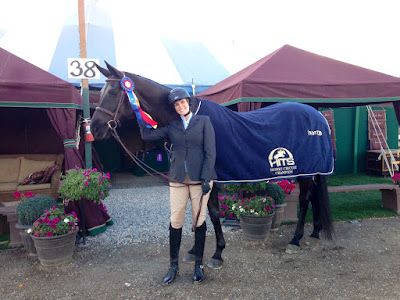 Anyway, so we are skipping Thermal this year.  Instead we are looking at the Blenheim series, which is a bit later (starts March 22) and is essentially an alternative to the first Spring show offered locally.  It's also in Orange County instead of the desert which won some points with other owners.

I've (clearly) never showed there, so I'm not sure how much lovelier it will necessarily be - but California in March sounds better than the PNW in March so I'll take it.

The current plan is to show for two weeks, with the option of staying for a third if its really necessary.  My goals with Windsor are very limited and foggy since we know nothing about his behavior at a show.  No idea if he's hot or spooky, or herd bound, or easy, or excited, or impossible to make canter in 75 degree heat, or what.

Especially during the first week, we will be feeling him out and seeing where our issues may crop up.  I have no idea what divisions we'll enter and fully expect to make a game time decision there.
Hopefully by the second week we'll start to have a notion of what horse we are working with - what he needs to be his best (or at least not his worst), and how we should shape the rest of the season.

Right now the only other "planned" stop is a week or two up at Thunderbird at the end of May, start of June.  While not exactly in our back yard, it's a only 3 hours away (though there is a boarder to cross..) which makes it slightly more possible to commute back and forth some of the time.

After that there are lots of options but I think they will be determined by how those first couple shows go and also things like soundness, and money and all those other pesky details that are required to actually get yourself to the show ring.

Blenheim is still 11 weeks out, which - when I remember I've only had Windsor home for 6 weeks, sounds like a really long time to get our acts together.