The second part of the Tack Splurge Review... focusing on the goodies for Windsor.

First up, the SmartPak Breathable Girth.

It's listed at about $35, though I stacked another discount on that so I think my final price was right about $30. 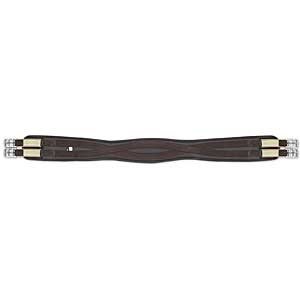 For $30, this is hands down the best girth I have ever purchased.  I wouldn't go so far as to want to show in it (I'm a leather girth snob for the show ring), but I am totally impressed with the initial quality on this product.  The hardware is hefty, the elastic is sturdy and overall it seems well constructed.  Most importantly though, it has significantly reduced Windsor's arm-pit-drying-time and that is worth it's weight in gold.  I've only been using it a couple of weeks, but if it holds up as a solid schooling girth - this thing gets two thumbs up.

Next, I had mentioned that I picked up some new pillow wraps and standing bandages.  The pillow wraps are Wilkers, which are my perennial favorite.  They wash pretty well and I've never had a problem with them deteriorating before I decide it's time for a fresh set.

The standing bandages are also whatever generic brand I typically buy, so not a lot to report on there either - except for my new experiment with embroidering them on the tail of the bandage. 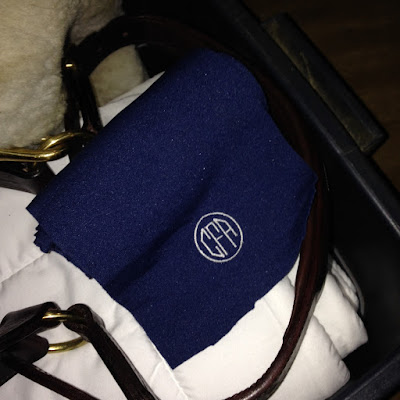 This is my new favorite thing.  I like that the monogram shows when the bandages are ready to be used, so it's obvious who they belong to, but the monogram is hidden when the wraps are on so I don't have to obsess about making everything line up.  They are easy to identify in barn laundry and well worth the personalization fee in my opinion.  I will be doing this for future bandages.

Less practical (or at least, less urgent..) on the acquisition list was my new set of reins from CWD.  Though I knew I would eventually need some new show reins I wasn't super excited about this purchase because I was spending more money than I wanted to and was a little grumpy about it.

However, after getting, oiling and riding with these reins I retract any and all grumpiness about the price tag.

Out of the box they were a tad light (even though they were "dark"), and a bit stiff, but clearly a high quality leather.  I threw them in a ziplock with a heavy dribble of Hydrophane to darken them a tad, and they really turned out a beautiful color that perfectly matches the CWD bridle.

Since they were still a tad stiff I put them back in the bag with regular Neatsfoot Oil for a bit more conditioning overnight.  They ended up a tad over oiled, but not egregiously so.

I intended to "save" these for show use only but wanted to ride in them a bit to break them in and get used to their feel - and I can already tell you that I will NOT be taking these reins off my bridle anytime soon.  They feel WONDERFUL in my hands while I ride.  They leather is heavy and soft, and totally what I like in a rein.  I think the reins themselves are a tad wider than normal so they fill my hands nicely and the laces actually act as a grip mechanism.  I'm obsessed.  Fully. Obsessed.

My only complaint is that in true CWD form, they stamp information in really annoying places.

Unlike my bridle there's no irritating "CWD" badge (they have since stopped putting those on Hunter bridles..), but there is an ugly, poorly aligned serial number stamped on the tail of one rein close to the buckle. 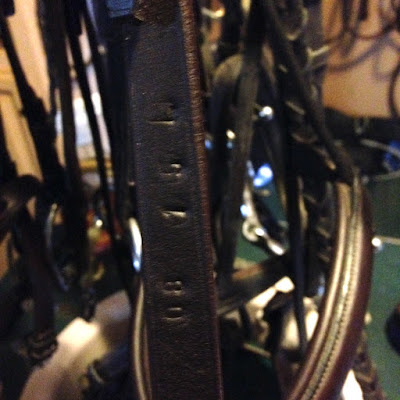 From a distance it isn't visible, but I see it while I'm riding... and while I'm cleaning, and it irritates me to no end...

Not only could the stamp have been on the underside of the rein, it could have been done in a nice, straight manner and looked more polished, or at least like a drunk toddler didn't do it with a bedazzler gun.

I'm sure lots of people don't care about that, but it seems like an easy detail to get right - especially for $200 reins.  (face palm).

The items that I didn't talk about in my previous include some BoT polos, and a new show halter for Windsor. 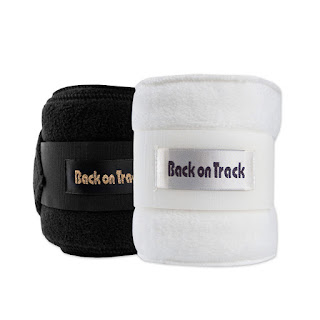 The polos I picked up on TOTD when they were blowing out everything Back on Track has ever made.  I've heard people love the polos and since I cannot for the life of me find ANY of Prair's many sets, I bought four of them in white - cause... fancy.  (for the record, not being able to find stuff is the punishment I get for actually trying to organize my crap).

I wrap Windsor up with these for our flat lessons, which are admittedly only once or twice a week. But I like them.  I love the thickness and also that the back of the wrap is a flat knit instead of fleece.  They have a good amount of stretch and the Velcro is sturdy which I appreciate.

I don't really know what else to say about polos except that I don't feel super horrible about the $30 price tag given the high quality.  Also, BoT.  I like BoT, and I hope Windsy does too.

The Halter was another unnecessary purchase, but one I am (again) happy with.

I commandeered Prair's former show halter as Windsor's every day one since it was available and fit him.  That halter is the Circuit Padded Leather Halter and I purchased it from Dover for about $100 at the time (I think it's $110 now).  I've never had a complaint about it, though the F/S was a tad short for Prair, so the guys at the barn swapped crown pieces (without asking..) with another halter that was apparently an O/S to give Pair some extra length.  I appreciate that they made it fit, but it always annoyed me that her show halter had this slightly more worn crown piece when everything else was pretty and new.  I would have said something but, a) it fit, and b) my WASPy fear of confrontation meant I'd rather be irritated by it than actually have a conversation and potentially upset them for trying to do something nice.

The point of all that was the former show halter has become an everyday halter.. so I "needed" a new show option.  On one of SmartPak's black Fridays, or cyber mondays or 12 days of Christmas... or whatever, they had a very similar piece on super sale for $70.

$70 is a great price for a nice, detailed, fancy stitched halter.  So... obviously I bought it.  It's their "Wellfleet Fancy Stitch Padded Halter" and I love it.   Normal price is $90, and I think that's still a fair value.  Out of the box, the padding is noticeably softer than the Circuit, but otherwise, the two are very comparable in both style and apparent quality.   Again, I had SmartPak handle the personalizing, so it arrived all ready to go. 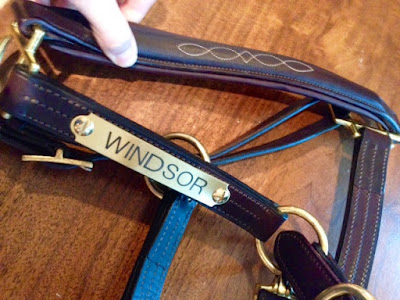 I think it's fair to note that while SmartPak's Halter plates are made and shipped very quickly, they are no where near the quality of Halter Tags.  Halter Tags is not the most prompt in terms of delivery (um, at all), but their engraving is stellar.... and they are cheaper.

That brings us to the end of the Tack Binge update.  There were a couple horse items wrapped up under the Christmas Tree, but since they haven't been used yet, I don't have much of an opinion to share.. so those will have to wait for another day.

But they rest of it is all totally reasonable, right?