I finally caved and bought the folder of pro pics from Thunderbird... because... well, it doesn't take long for me to start going through horse show withdrawals and having some new pics to flip through is just the sort of dopamine hit I need to keep me going (even if we are literally in the middle of another show as we speak....).

In theory it would have been helpful to purchase said photos prior to blogging about Thunderbird so that I had some, you know, pictures.... but oh well.

I assure you that the rest of them will surface - and that there are some really cute ones (cause.. it's Windsor).  But I just HAVE to share this one snap that cracks me up: 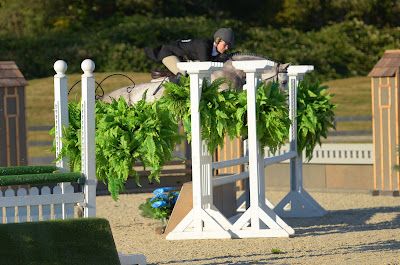 Legit - it looks like my trainer is riding a boatload of magic-flying-ferns instead of a horse.  And I can only see enough of Winds to tell that he is super round and his ears are forward and it would have been an AWESOME pic of the derby...

If you could see him.

I'm still sort of tempted to blow it up and frame it for the barn tack room though.

I should say that to the photographer's credit, they got lots of other good shots and as hysterical as this photo is - it's not indicative of their general competence.  I'm always grateful to have awesome pro shots, so I hope they keep shooting my guy ;)
Posted by Gingham at 8:53 AM