I adore showing at Thunderbird.  There's a post brewing about what makes some venues so much nicer to be at than others... but for now I can say with conviction that given the back-to-back comparison with the Evergreen Classic -  Tbird wins. Hands down.

I was a bit timid about Tbird after I felt like Winds wasn't jumping his best at Evergreen, but the bigger rings and fabulous footing seemed to make a difference.  He still wasn't blooming over the fences how I like him to, but he was soft and correct and a very obedient boy.

Those of you living through insane heat waves will giggle, but two weeks of 85+ is not our normal here and everyone, including the horses were a bit droopy.

But the grounds were lovely, jumps were beautifully built, and Windsor is unquestioningly adorable when he does his job.

First Round was great. No warm up classes, no lunge, nothing.  He was pretty chill aside from getting a bit quick through the two stride at the end.

He ended up Second in a nicely competitive 3'3" division of 10.

Second round was also great.  A bit more pace (in a good way), but a bit stiffer in the judge's line.  We were 3rd.

We came back for the jog and under saddle (omg. So sweaty). And Winds was a good sport.  He was a bit sluggish, but he uses his shoulder significantly better on the nice GGT footing than he does in sand.  It's really fun to hack him on that surface because it feels like you can actually push his stride out a bit.  We snagged a 3rd on the flat which is a *really* nice ribbon for us in that company.  The two (also gray) horses ahead of us are super adorable Huntery-Hunters that we aren't likely to finish ahead of Under Saddle, ever.

The second day Winds was definitely jumping a bit stiff.  He maintained a nice balance and pace, but he was wanting to lean a bit and pop off his right lead - which is a new trick.  A hard rub at the first fence and a swap into he judge's line kept us out of the ribbons in this trip.

The last round was a bit of a recovery.  Whether Winds was just looser after jumping a round or what - I'm not sure, but he seemed to work out of it a bit.  He snagged a second place in this, even with a bit of a rub in the 5 to 2 stride (love 5 to 2 strides, so fun).


The 2nd was great because not only did it clinch Reserve in the division, but it was a Stake class, so he earned some money too. 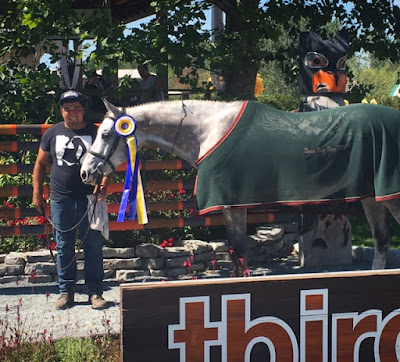 Hoever the stiffness was a tad alarming.  Even with his crazy schedule I never like to think my horse is sore or compensating somewhere, so we booked an appointment with an FEI vet who was on the grounds and specializes in bodywork and acupuncture.

I always love the idea of having a practitioner who is capable of catching potentially bigger issues (and exploring them if necessary).

If Winds still wasn't feeling good after his session - I could haul him home early and start his time off a bit earlier than planned.

So that's the start to the first week of Third (spoiler alert, he felt great after the bodywork and we stayed....).