In the name of archival integrity, I need to get some actual evidence of how Winds and I are marching around the ring.

All in all, I am really happy with how we handled the Equitation ring at Thunderbird both weeks of August.  While I didn't have the big open gallop that I had in the field at Milner - I felt like we were as consistent as we have ever been and able to make (mostly) good choices when necessary.

Let's start with the first week:

Nothing was very equitation-y, but we rode well and overcame some of our goblins, namely staying straight on the left lead and stepping up to our distances then falling back.

Our second round was much the same, but they turned on the BIG sprinklers in the ring next door.  I didn't think twice about it because Winds doesn't care about such things, but toward the end as we came into the Judge's line, the wind shifted and blew the sprinkler mist over into our faces.  It was weird, and although you can't see Winds do much, he sorta fell in away from the mystery rain, and I lost his inside shoulder.  That set us up for a borderline late change and then I never really got him back up and balanced before the two stride.  We didn't chip in, but I didn't have him straight and he sorta jumped over his shoulder.  Somehow we won the class - but in watching the video, the tension isn't nearly as visible as it felt.

Week two, the course design was a tad more interesting.  Lots more singles and omg, a rollback.
Winds was not intrigued by the jumps AT ALL and I felt like I was beating him around the ring.  This horse is so much easier to ride when he cares even just a little bit about what's in the ring, but it's hard to fabricate that the second week of a show. 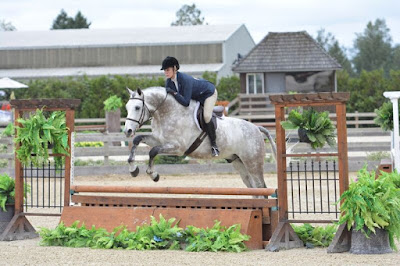 I made the mistake of enjoying my coffee while I watched some early rounds go in my ring - and managed to totally freak myself out.  Of the 8 rounds I let myself watch, 4 people fell off, two had refusals and only 2 got through clean.  Never in my life have I seen such a bloodbath at 2'9", and it did nothing to help my brain calm down as I went to get ready.  Usually I watch rounds so that my self talk is "see, it's fine. Everyone is fine, just ride the lines, it's fine. YOURE FINE.". Didn't work out that way this time, instead I saw all the nightmare scenarios I had been dreaming up come true.

Our first round was relatively uneventful (praise Jesus), I lost his shoulder in the rollback and had to add a stride.  In a perfect world if I held my track, I think there would have been one less and looked a bit better - but not tragic - we worked it out.  Even with the wonky rollback we ended up first out of 22.

The second round was FUN.  There were some end jumps that are really hard to see on the video, but we basically got to clover leaf around them which had me a touch worried given the fact that Mr. Casual was all but sleeping on the job.

Turns out, it was exactly what we needed, and as soon as we turned up the centerline to a new fence Winds woke up, sat up and felt like a very rideable sports car.

The difference in his interest and balance was SO tangible it's hard to discount.  This horse legit hates line/diagonal/line/diagonal.  Well, maybe hate is a strong word, but he sure doesn't care about it at all.


We ended up 5th in this round - but fences 4,5,6 were hands down them most fun I had all week.  (that sounds sorta sad when I type it, other things were fun too..).  But as I look forward at my goals with Winds, I'm starting to shift them a bit.  I think maybe (horse gods allowing), this is the horse I take in whatever Medals I can find, and let him play in the derbies.

I also have to note that we were 2nd on the flat both weeks - and in a division of 20 that is something I am really proud of.  I've been working a LOT on my ability to stretch and stay tall without getting stiff and I think maybe, just maybe I'm making progress.  The same girl beat me both weeks (damn teenagers), but I had her pinned as the winner even out in warm up.  Gorgeous rider, lovely look on a horse and really, really soft.  I'm totally ok riding behind someone like that.  There is no world where I beat her on the flat.

It was a great way to finish the Summer, and really a testament to how much I am starting to gel with Winds.  Love this horse.