Spoiler alert, I don't love spurs.  I grew up on hot (usually part-Arab) horses who had WAY more go-than-whoa and spent way more time thinking about what bit I needed on cross country and never really worried about what spur (none) would get the job done (none).

As I traipsed into Dressage as an adult, I put spurs on occasionally.

REALLY long time readers will recall the six (+) months where Pia straight up didn't go forward (at all). and during my early days with Prair, a Teeny Tiny nub of a spur was helpful establishing our lateral work.

I have relatively long legs and have always been able to squeeze the tweedle out of even the laziest of the lazy without much spur.  On top of that, a large spur often results in me unintentionally taking my leg off and causing more problems than the spur solves.

With that info in mind, my spur collection consists precisely of 1) the tiniest price of wales spur ever made.  and 2) cheap plastic ball spurs. 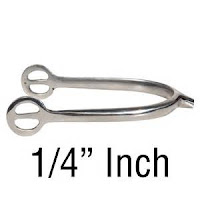 Recently, the ball spurs have been getting a workout.  I almost always wear them on Winds now, as my leg is finally educated enough to know the difference between calf and spur.  Plus, if it's over 68 degrees that dude needs a nudge in the ribs to get going. (#metoo).

BUT, they look dorky, aren't actually very spur-like and after a really hot summer where my trainer raised her eyebrow several times and said "really? I've been using a round rowel on him" I have been casually considering an upgrade to ye ol' spur closet.

I find a lot of comfort in my big, soft, totally mild rubber ball spurs.  I like knowing that even if I lose my balance and accidentally JAB Winds with them, he won't really care - but the downside of that comfort is that when I do actually want a gas pedal, I don't have a good option.

And as I've lamented recently (though maybe not online):

I AM OUT OF STUFF TO SHOP FOR.

I have all the tack, all the gear all the everything I ever (ever) dreamed of (not the least of which includes two incredible horses).  So when the horse gods showed me something that I could actually justify shopping for - I shopped.

It's hard to make spurs fun and/or interesting without going off the deep end.

For a while I looked at Signature Spurs, mostly because I remain obsessed with the crop I ordered from them and love their service.

But I couldn't decide *what* spur I needed exactly, and with higher end spurs cresting the $100 mark, I didn't want to order 4 new sets just so I had everything to choose from.

That meant my eye turned to some of the manufacturers making spur sets with exchangeable shanks.  I stalked them on insta, I stalked online... and eventually I opted to go with American Equus.  (due in no small part to my obsession with their stirrups).

American Equus machines their spurs out of aluminum (also true of their stirrups and horseshoes), but that is a material I had never tried as a spur.  Also, they claim that their interchangeable spurs are super easy to swap, and can even be done in the saddle without removing your spur strap.  I hadn't ever seen the spurs in person, so wasn't entirely sure how this worked, but I had a glass of wine and placed an order.

The spurs arrived promptly, and came in a lovely box with customized foam inserts that presented the spurs and extra shanks beautifully. (I forgot to take a picture).  While they offer lots of (really fun) color options, I selected a conservative Show Chrome with the idea that I would potentially wear these in the hunter ring.

The spurs are really pretty.

The shanks are super easy to swap (as promised) and just require a stiff tug to get them out (they are held in by a compression fit and o-ring).


I swapped the rowels out for the 1/2" shanks and headed for the barn.

My one complaint is that the spurs themselves are very narrow, and harder than stainless spurs to widen (because - aluminum).  I wrestled with them for a minute and got them to a comfortable fit at my ankle, without having them too loose at my heel.

Before I hopped on, I played around with swapping the shanks while the spur was on my foot, and as advertised - it was easy without being SO easy that I'd worry about them popping out while riding.

Once on, I was really happy with how they spurs felt.  I liked the rounded tips, and felt like they were easy to use with nuance while still giving me some go.  I am also very particular about my spurs moving around while I'm riding, and these didn't slip once even though I didn't have them positioned on my spur rests.

All in all, these spurs are off to a good start.  I like the look, I like the feel, and I really like the idea of being able to swap out the shanks.

Winds is a horse that typically needs more spur in warm up than he does in the ring, and being able to downsize my spurs at the back gate gives me one less thing to worry about on course.

And isn't that what I really needed.. :)