Summer Shows, and New Baby Horse and Everything

Holy no blog.  I wish I had been inspired to write the last couple weeks because lots of fun things have been happening, plus a few cute things (LEADLINE) and one not so fun (MRI). BOOOOOO

But let's do the 60 second rundown, shall we? 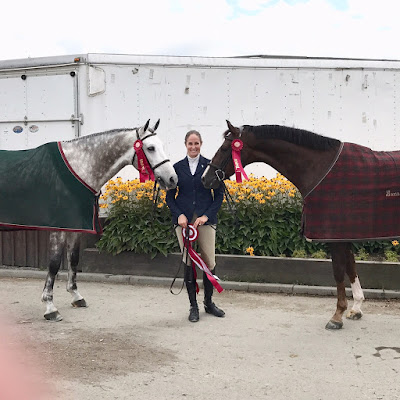 Thunderbird.  Both boys went up to Tbird in August for both weeks of showing.  Windsor was a superstar.  He did one warm up class with the pro, looked bored, and then didn't come out again until the Derby, which was in a different ring and in hindsight, he was WAY TOO FRESH.


Whelp, lesson learned.  He overjumped everything, and while it wasn't his most fluid course ever, the 72.5 base score drew confused gasps from bystanders who aren't as biased as I am. It's the first time he hasn't made the handy... had to happen sometime!

Then it was my turn.  We did our equitation and managed to win a round and get second on the flat out of about 22.  I was thrilled.
Winds was awesome, and our courses were actually interesting.  We were champion.

Quiz made his debut in the Baby Greens and won his first class each day and was SO TIRED in his second that some baby mistake usually came out.  But he is a DUDE.  Didn't bat an eye at anything.  No lunge, no extra rides, prep, voodoo, nothing.  He's just a solid citizen.  He peeked at the flower boxes exactly once as he hopped over and never batted an eye after that.

Week two was much the same repeat.  Quiz rocked the Baby Greens again, Windsy packed me around the Eq and the Hunters. 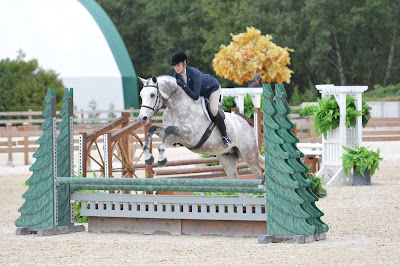 We repeated our performance in the Eq - and had a nice finish to the show in our Hunters, winning one round, nabbing a ribbon in a HUGE flat class and getting our proverbial shit together in the classic to get 2nd (due to an 85 in our second round).

Also, I fell slightly in love with a Nations Cup rider, who I may have stalked a teeny tiny bit (equal interest in his horse, let's be real), bought a new show shirt, oh and débuted my new Burgundy show coat from AA.  It was a good show.
At home, Quiz has continued to be a total stud.  He learns every ride, has yet to get grumpy or say no, and even with a lot of rides by yours truly - is finding his balance and fitness.  I have yet to really fault him for something.

Winds was stepping a bit short at the end of the show, so Paranoid Polly over here had the vet out once we were home.  She confirmed that he was looking slightly off on the LF again, and that it did block out in the foot.  So we headed south for ANOTHER MRI to see what's up.

Are things continuing to heal? Did he re-injure it? Is this the new status quo and I need adjust his management and schedule accordingly? Who knows.


Well, Hopefully, I'll know - as soon as my vet calls.  Still waiting for the official report...


OH, and the kid did her first deadline class.  It was insanely adorable and there are so many photos that I need to do a separate post on that.  Hopefully I'll get around to that before she turns 16.