One of my goals this year is to have Winds participate in Derby classes instead of a Pro Division. 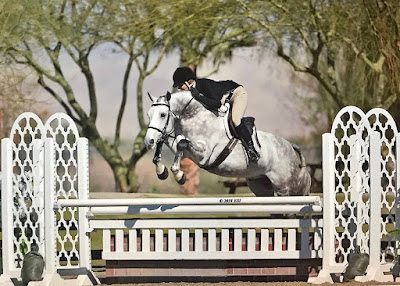 This plan is driven by a few considerations, not the least of which is trying to minimize the number of rounds that the Gray Prince does each week.  In addition to that, I really love watching him jump bigger jumps and I think the Derby classes are even more fun to watch when your horse is going around the track.

I also recognize that Winds probably won't be jumping bigger jumps forever, so if he's sound and happy, I'd like to make the memories while I can.

So, while I would have loved to toss Winds in a few Derbies while we were out in the sunshine - one of my gripes with HITS is that they only offer USHJA sanctioned classes during two of their eight weeks of showing.  If you aren't there week 4 or 8, your only similar option is to enter the $5,000 Devoucoux Hunter Prix which is way, way less exciting.  I still entered it, because it got Winds in front of some bigger jumps (3'5"), and on a longer track.  The only bummer is that the second round was still a classic hunter round, so no fun handy shenanigans, and no high options....

But, I tried to remember that California is our Spring Training, not the World Series - so we were there to learn, practice, move up and see where we stood after a winter of good work.

This was also our first chance to experiment with a (much) lighter schedule.  Winds isn't a spooky horse, but he is easily excited by bigger jumps and gets a bit keen.  So "prepping" him is less about getting him so tired he won't bother to spook, and more about taking a teeny tiny edge off so he doesn't power off the ground and attack his fences with too much gusto.

For Week V, Winds had two classes on Tuesday (one with me, and one with the pro), then nothing Wednesday, another warm up in Ring 1 on Thursday - the Prix Friday, then two AA rounds with me on Saturday and two more on Sunday.

For the Prix on Friday, he was extremely casual until he realized the jumps were 3'5" and that was more fun than the 3' he'd been snoozing over all week.  He wasn't naughty, but definitely a bit tighter across his back than I'd like to see and opening up a bit over his fences.

He jumped mostly well, got some good scores, and if he hadn't had an extremely uncharacteristic scoot coming home in the second round - I think he would have pulled a pretty high ribbon.  With the scoot, we dropped down to 9th - but still a respectable result in a polished crowd.  Especially since we were using the Hunter Prix as a warm up/data point to see where we were at.

Here are the videos from Week V:

Week VI we stuck to the same schedule, but dropped a trainer warm up on Tuesday.  He was more relaxed across the board and looked softer in the ring for the Prix.   Second round he swapped in the two stride, but otherwise looked like he was remembering how to be a show hunter.  Winds managed to snag 4th place, in another lovely field and paid for our dinner out that night (holla!).


On the horizon we head up to Thunderbird for a week in April, where Winds will probably do a one round Canadian Derby (I love those) and pack me around the AA's.  After that, we have some down time until we go back to Tbird at the end of May for two weeks of showing. That would be the first time we would be able to consider an International Derby if he feels good and ready.