I've spent the better part of the last two years trying to undo enough bad habits that I can (respectably) make my way around the AA's with my 1.40m horse.

At times this timeline and process has been frustrating and disheartening, but I continue to adore my gray horse and his ability to help me let go of sins past and learn how to ride like a competent adult who has a significantly reduced sense of risk tolerance and a significantly increased sensitivity to self preservation.

So, when the moment finally came for us to go canter around the 3' ring together, I am really, really proud that there were lots of moments that looked like this: 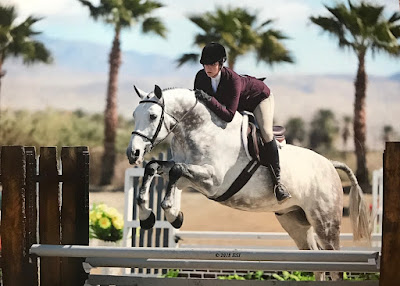 And thankfully only one moment that looked like this: 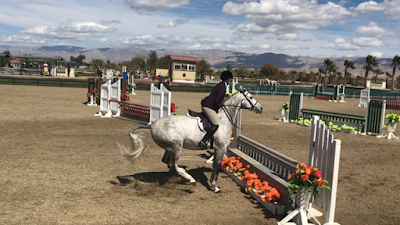 But we'll get to that.

All in all, I had a lot of fun.  Winds was significantly more interested in his job than he was with me in the ring last summer which I attribute to a combination of increased comfort as well as increased give-a-shit-ness for a slightly taller fence.

My videos show that I am in fact riding better, and that I can be taught.  So that is something that I am trying to hold on to and pat myself on the back for.  They also show me that I still love to drop my hands, wait in the corner and collapse my left side.

But that's why we love this sport, there's always something (or like 10 somethings) to be working on.  I admit that like most type A ammys in the Hunter Ring, it's much, much easier to focus on the 10 somethings than it is on the progress - but I'm lucky to have a crazy supportive group of barn ladies who are always quick to point out what's going well or more importantly - going better than before.


Anyway, there was that, and a monster chip, but otherwise we recovered.  I look tense, but you can tell I'm starting to relax by the end.  The judge might have mixed up his notes because we pulled a 3rd in this round.  I know Winds is pretty lovely, but I guess maybe everyone else had a bobble too.  I guess since it was the first day of the second half of the circuit maybe I wasn't the only one stepping back into the ring for the first time in a while....


And for comparison when nerves were slightly less at play - here is our second round on Sunday from the first week.  Not perfect by any means, but a more consistent pace, I was thinking more in the corner and way more at ease with Winds' level of engagement.  I think we got 4th in this one out of about 20.  (TAKE THE RIBBONS AND RUN).

The second week was much the same, with mostly small improvements.  Still a slightly late change or one chip sprinkled in each round, but the rest of it was pretty good distances with pretty good pace and pretty good decisions.  I just need to up the consistency and we'll start finding more success.


I did have my HORRID very bad, no good, chip during the second week.


It's probably the first time I thought I was actually going to flip my horse (and that includes all the harebrained shit I did on cross country in my youth).  I totally overthought a corner, second guessed myself (be patient, be patient, she said be patient, holy crap we need to gooooooo!).  And it didn't work out well.  I gunned Winds, he tried to listen, then realized he needed to put a foot down, but I was pretty sure his legs were going to land in the flower boxes and trip us.  I had already mentally committed to bailing of his left shoulder when he managed to touch toes down - pop them back up and get us over in a much less dramatic fashion than I had pictured.  (Word has it we stayed very straight, because my trainer couldn't tell how ugly it was from behind.....)


My next thought was "hmm.  That was bad.  We should just regroup, add in the line and come out more organized."  But Winds landed, knew he had ground to make up and marched right up the line in 5 and jumped out like I hadn't totally messed up the first part.  What a prince he is.


So ended our first exploration of the AA's together.  Mostly good, some nerves, some pilot error, a LOT of pats for Windsor and a couple good ribbons to feel good about.