Two Weeks in the Desert

The boys and I are back from our first trip back to HITS in three years (and both of their first trips to the show). 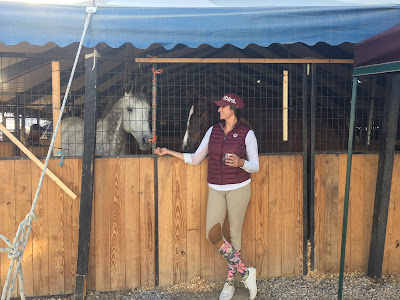 I continue to have several gripes about how HITS operates their shows, but I do have to give them credit for some significant infrastructure improvements - and I can't deny that I love getting out into the sunshine and show ring months before the circuit kicks off at home. 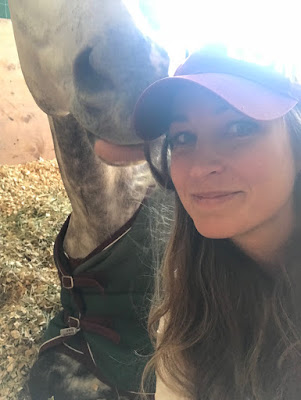 Two weeks of showing saw me tiptoe into the Adult Amateurs with fairly consistent results (only one gasp-worthy moment).  Winds galloped around the Devoucoux Prix both weeks with admirable rounds and top ribbons.  Quiz moved into the 3' Greens, won a very competitive hack, and took first in a class of 85 with John French in the irons.  I meandered around the 2'3" with the baby, drank a lot of wine with my barn ladies and walked over 50 miles each week which totally justified my breakfast burrito habit...

We experimented with a (much) lighter schedule for Windsor both weeks.  One pro warm up to get him in the ring that would have the Prix.  Then just my AA division.  The second week I added a 2'9" Eq over fences to ride something a bit more fun (adult Eq ran the same day as the Prix so I wasn't able to play in that ring..).  He's definitely a bit brighter with fewer trips around the ring, but I think keeping his miles to a minimum will serve us all better in the long run. 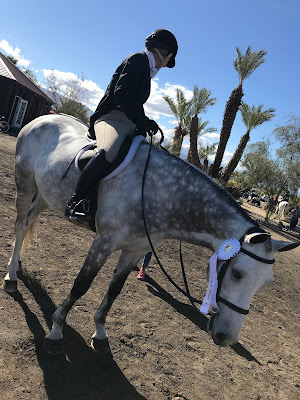 Quiz was a dude and took everything including the 40mph winds without batting an eye.  The first week he looked a little wiggly and green in his division, but by the end of week two the polish was really starting to come out and show itself over fences.  I wanted to ride him in all the tiny divisions, but in the name of not overwhelming him or making him hate shows, we kept it light and low key.

I'll get some videos up of the Prix rounds and some of Quiz's debut as well.  I'd love to share the video with Frenchie riding, but uh.... I managed to not press record so I have exactly ONE SECOND of that glorious round.  dammit.

After a week of rest and relaxation we'll get back to work and focus on fixing the small stuff before heading up to Thunderbird in April!