I probably should be posting something about Gus' Birthday, but I'll just let the record show I actually remembered and skip to the good stuff. 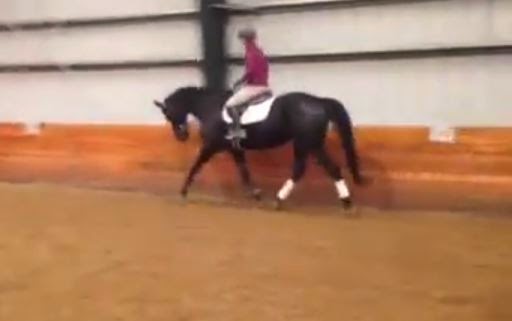 Saw Prair get worked this morning, and holy-omg-ness - the mare looks great.

For one thing she's putting on muscle nicely, both in the butt and the neck, which are two places she could use a tad more meat.

For another, the mystery diahrea seems to be abating... not totally gone, but maybe 80% better - which goes a long way on the less gross/alarming factor.

But more importantly, the mare looks like a goddess.  She's moving like a queen, carrying herself more and her jumps are looking softer, rounder and those knees are finally starting to snap!  Also doesn't hurt that she looks like a glossy wet seal.  love that shine.

She's been working in a new bit (Myler Combo)  which is definitely encouraging a bit more lift and carriage, but I also think that her body must be feeling good and there was another level of relaxation in her work today that probably contributed to the loveliness.

I wiped the grin off my face just long enough to snap a quick clip of her trot work - and have probably watched it on my phone no less than 30 times since I left the barn.

Nothing makes you feel better than seeing your horse moving well and feeling great, especially after a couple weeks of crossing your fingers that something isn't seriously wrong...

Look at this swing:

I love that her loft has returned and she's lifting through her back more.  I also love that she's staying very light in the bridle (I would too with a combo bit in my mouth..).  Her rhythm is still a little unsteady at times, but I prefer that to her leaning on the bit to steady herself.  Lots of her schooling time has been working on moving forward and coming back - especially at the canter - which I think is helping Prairie to really sit back and round up her back to slow down rather than invert and skid to a stop...

Myler Combos aren't my favorite thing in the world to use, but I do like that if the horse evades above the bit, they correct themselves, and I also appreciate that she's still got a soft, smooth mouthpiece in.  Right now it seems like a helpful tool and the total lack of teeth grinding makes me think she's not afraid of it or stressed out.

Over fences things looked even better, soft to the fences, able to slow her takeoff and landing and comfortable even from longer spots....

After their ride, I got my horse fix in and groomed the mare up, fed her a week's worth of treats and got my trunk organized.

So I'm feeling good about the show next week.  Hopefully we get a bit of redemption from our last outing and we stay sound and happy and relaxed for everything.  I'm off traveling for work right up until the mare's first days of classes so I won't be able to stalk schooling day or obsess much of anything.