Admittedly, I haven't thought nearly as much as I could about who I would breed Prair to.

Way back when, I thought I'd breed Prair when I was preggo and also out of the tack - but then I sobered up and realized the only thing more terrifying than your first kid or your first foal would be your first kid AND your first foal.  Lord knows I need only be responsible for the good (or bad) behavior of one thing at a time...

All that aside, much like everyone else I love, love, love my horse and want to magically keep her young and sound forever - though producing a quality foal with all the things I like minus the few things I don't is a close second.

I think Prair has lots of nice things to pass on to babies and her success both in the USDF world and start of some success in Hunter Land makes her a decent broodmare candidate.  There are certain things I'd like to help correct... namely her back, but other than that, the mare has proven sound in a variety conditions with a variety of work... so maybe it's not the craziest thing in the world... plus if everything else I rode moved like her.. I'd be thrilled.

Since she's already been bred twice, I might as well start with those breedings and talk about what I like/don't like.

Prair's first baby hit the ground in 2010 and was by Sir Donnerhall (Sandro Hit/Donnerhall).  I like him.  He's pretty, his babies are pretty and he moves.

The baby was sold in utero as a mystery and ended up being a cute little black colt.  I've tracked down a few pictures of him and a video from last fall as a 3 year old.
I'm the first to admit that I'm terrible at evaluating foals and their confirmation.  Mostly my judgements are reduced to "cute" or "not cute."  (for the record, most are cute).

Here is the video:

He's got a nice float to his trot and it looks like he might be a tad more relaxed than his mother.  Definitely starting to see Prair's long neck show up.. but it looks like his back is quite a bit shorter and he'll be stronger across the croup...

So working with a sample size of one.. I like this cross.  And I'd consider it again for sure if I were breeding for Dressage.  If i turned my eye to hunter.jumper land a bit more I might consider other options...

We've already talked about Prair's 2011 filly quite a bit, but I'll still give her some space here.  Prairie carried this foal herself, and I'm pretty sure the extra weight on her back, was probably not an ideal thing.. but the baby turned out cute!

As far as color goes I wouldn't personally breed for it (now that I've had Black, I... well... would rather not go back), but I love how Prada turned out.  The medicine hat, dark tail... so adorable.  The light/dark legs makes for a bit of an optical illusion that might make her look lame when she's not, but I love everything else!

Prada's sire is Radikal, an RSPI stallion (Rotspon/Weltmeyer) who scored well in his testing but has been sidelined by an injury.  He's a looker, but not very proven.  I do love his breeding, and there are some nice Rotspon jumpers out there... so I wouldn't necessarily cross him off the list either.

Prada shares Prair's more refined look (where the colt doesn't as much), and if you imagine her all black, you can certainly see the aesthetic resemblances.

In watching the videos that have been posted, so far it looks like Prada is also a tad more relaxed than her mother.  If anything both she and the colt appear to need some... encouragement in their early work.

Here's the most recent video of Prada starting under saddle.  She's adorable!

So that's what we've already seen come out of the mare (so to speak), so let's talk about what could be. (grin).

Since I'm bad that this, I'm just going to share a suggestion that came by way of D and a stallion she stumbled onto - Bon Balou.

He's an 2006 Elite Hanoverian Stallion (Balou du Rouet x Argentinus x Landadel).  Totally different lines than Miss Prair and lots more spring!  His movement isn't necessarily ideal for the Hunter ring, but I love his look - and I think his nice compact frame would compliment Prair's (less compact) frame and would strengthen her over the back.  He seems to be pretty relaxed and easy over fences, and holy moly is he bouncy! 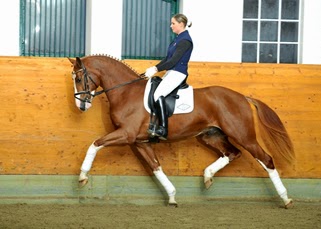 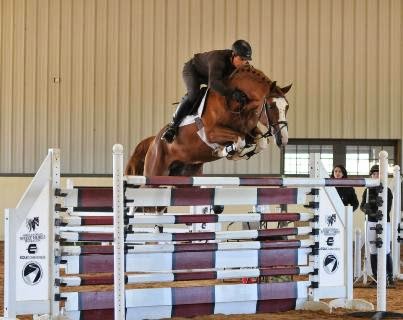 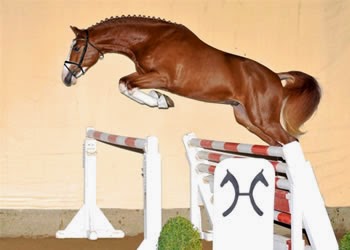 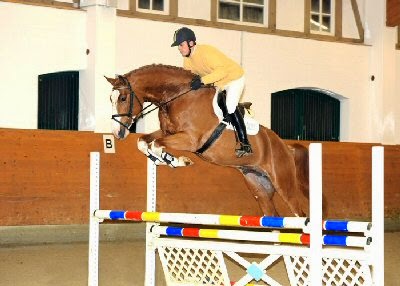 and some videos, cause we all love stallion vids.

First as a 3 year old in Germany:


I'm not sure that a red head with chrome would help my pursuit of another black baby... but I think this guy is adorable!

So there we have it.  A look at the stallions Prair has already bred to, as well as a possible future pairing.

Fun to think about!