The first week of Thunderbird, there was a Canadian Derby offered on Saturday.  If you recall from Milner, the Canadian Derbies run in a one round format with a traditional base score, plus up to 10 points for high options (2 points each), and up to 10 points awarded for Handiness displayed on course.

I've been having so much fun watching Winds in the Derbies, that I opted to not show my Hunter division over Saturday and Sunday and instead give him a light weekend with only the one Derby round Saturday night.

Friday afternoon we had the aforementioned vet take a peek as Winds.  He didn't find anything alarming (whew, big sigh) and just spent some time adjusting his shoulders and back and stretching him out every which way.

The nugget of useful information was that Winds' right hip doesn't want to abduct (is that moving out? I mean the one where your hip rolls out) as much as his left.  BUT his right hip rolls under easier than his left hip does.

Windsor wasn't sore to palpation, just unevenly stiff and very happy to have some massage and stretching time.  He also got some B6 shots in the trouble areas and that was it.

The vet told us to let him know how he felt and that we'd see improvement anywhere from 1 to 5 days out.  If we didn't feel any change, a more traditional lameness exam might be appropriate if we wanted to go looking for an explanation.

I hacked Winds out early on Saturday and he felt a bit looser to me.  Changes were lighter, better balanced and I wasn't feeling like he wanted off the right lead.  So I did some stretchy-trot figure eights then went for a long walk on a loose rein around the grounds.

Winds went towards the end of the order-of-go, which meant he didn't even start warming up until about 6:30pm.  By that time we had seem enough spooks and stops from shadows and horses who would rather be eating their dinner, that I was starting to question my decision to enter him.

But, as soon as he started warming up I could tell he was feeling great and trainer was happy with his way of going and if nothing else - I wanted to see him jump a round to compare to earlier in the week.

The course was nicely designed, options for some handy turns, etc.  But I was disappointed the class was taking place in a normal arena.  No combined rings, no change in venue.  Just the same ring we'd been in all week. 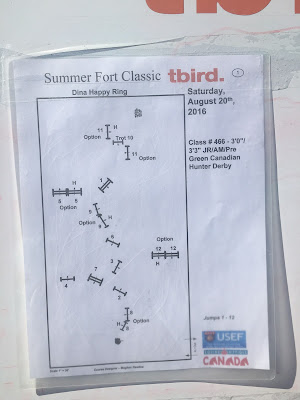 But he went in bright, and jumped around well.  He got a tad strong in a few places, which really only shows itself as him getting stiff in the bridle.  N was able to take the high options and the planned inside turns.

I don't have a ton of fascinating commentary.  He was jumping straighter, staying lighter and using his back more than he was earlier in the week and that was the big win.


Of course a base score of 83 plus 10 points for all 5  high options and a 7 for hardiness wasn't bad either.  Winds finished on another 100 and that was good enough for second place.  We were two points behind the winner - and honestly, they had a lovely, very polished trip and deserved the win.

With such a nice trip, we decided that Winds was ok to stay for the second week of the show.  We had rented a grass paddock that the horses were all taking turns in, and between that and three days to be off aside from long walks - I figured his schedule was lighter than normal.

I did show my equitation on Friday, but I'll recap that along with my hunter rounds form the second week at the same time.... On to week two!