Hormones? Back to the drawing board...

Okie Dokie.  I am officially, and without a doubt absolutely baffled by my mare.

Miss Pia was a lover last night.  She was sleepy and soft and super quiet. I think I skipped it in my (abbreviated) update yesterday, but the last couple days, she's been exceptionally accepting of nearly everything, particularly currying her girth area and increased leg pressure during our rides.

Both Tuesday and Wednesday I was able to curry/rub/bother her girth area as MUCH as I wanted to without so much as a pinned ear.  Add to that the fact that I have been able to wrap my legs around the mare with no objection and I've been pretty pleased.

The trend continued last night, but with one distinct addition.  *winking* 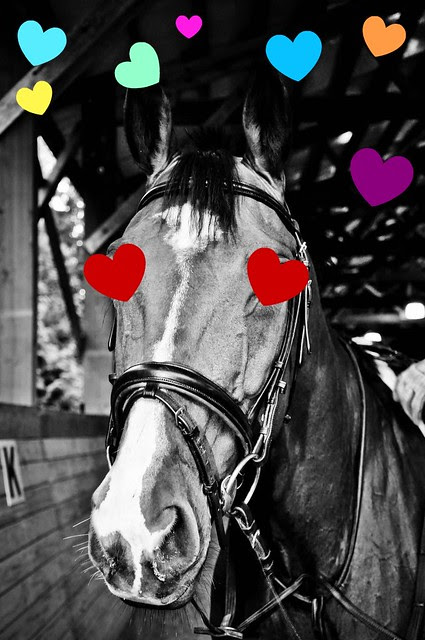 I checked my calendar.  Our last "difficult" rides were November 1st through the 4th.  She was EXCELLENT the last week of October, and that was when we had some of our best rides...

So, it makes sense that she's winking and being a total hussy.  It's been 15 days since her last difficult ride, which makes sense, that would account for a 15 day Diestrus period.  What doesn't make a crap ton of sense to me is why she would be in flaming winking heat, AND being an absolute lover.

I have heard tell of mares who are ok in Estrus until the actual follicle passes, which is what makes them mare-wolves, but most random experiences/articles/info that I can find say that typically, as soon as mares start the squat-pee and winking moves, you see them act uncomfortable in the cross ties, get cranky about grooming, and become she-devils under saddle..

So.  Which will it be? Will Pia throw my primary hypothesis (hormones make her crazy-crazy) for a loop?  Or will her behavior switch like a flip for the last few days of Estrus when the follicle actually passes?

I suppose only time will tell, but I do feel like there should be a betting pool on this one.

For those of the scientific inclination, here's where we stand with our variables:

Pia is back to her normal feed amount (after dropping 2 inches in a week) with increased hay.
She is still living outside full time.
She is being ridden in all the same tack and on the same 6 days a week schedule.

So, right now her "housing" is the only variable that has really changed, well that and (presumably) her hormone levels... but this week might help determine their factor in all of this.
Posted by Gingham at 12:32 PM