As always, the holiday weekend didn't exactly go as planned.  But, true to my form, if something gets canceled I usually end up spending more $$ to "make it up" to myself.

So, Wednesday, when we finally pulled the plug on the family trip to Sun Valley (waaahhh), I promptly hit the interwebs and found someplace fun for the Boy and I to escape to and still get in a few days of R&R and "escape".

This meant the mare wasn't really going to get any extra TLC from me over the weekend, but I did get a very exciting call from the local tack shop early Friday morning before we left... 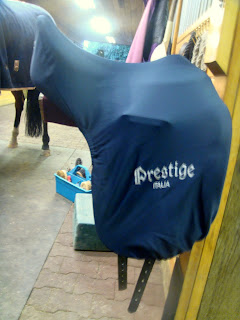 I toyed with the idea of going immediately to the tack shop (do not pass go) and picking up the saddle before we left town for the weekend, but then my mind filled with all sorts of horror stories like, getting in some accident driving through the mountains and having the saddle in the back.  Or getting stuck in the snow and having to abandon my saddle in the car. Or god forbid, some pony crazed tween at the lodge spying the new saddle cover in the back of my car and hacking through reinforced steel to swipe my new prized possession.  (Note that at no time was I concerned about the obvious ill-effects of any of those scenarios on myself, the Boy or the car, all of which would be much pricier/impossible to replace...)

So, in a rare moment, I decided that after FOUR MONTHS of waiting, I could stave off my need to smell the new saddle smell for another 48 hours and so I simply saved the voicemail announcing it's arrival and headed off to the mountains for a nice relaxing weekend.

Relaxing it was.  Essentially we found ourselves in a lovely winter wonderland complete with ice skating, long walks in the snow (with whiskey), an adorable little wooden "spa" on our deck and some great wine, food and general merriment.

There were no horses, but we did see a few reindeer when we were out walking around the small town, so that was exciting.  They looked a little sad tethered to their portable stall thingy, but the squealing excited children were not deterred. 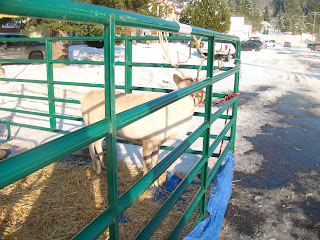 Sorta sad looking right?
Anyway we had a great time, clomping around in the snow and sunshine.  And to be perfectly honest, I probably only squealed "omg new saaaaadddle" once every 20 minutes or so, which I thought was pretty damn good given the circumstances 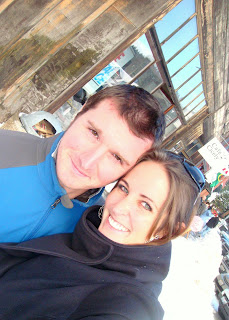 (Visions of new saddles dancing my my head...)
On the way home I went STRAIGHT to the tack shop (Boy still in tow) to collect my prize and was so damn excited, I forgot that I had a Gift Certificate burning a whole in my pocket that I've been patiently waiting to apply toward the balance on the damn saddle.  Oh well, I guess I'll just have to go back..

Remember how I had to wait extra time to allow for the "upgrades"?  Well, when my favorite saddle fitter whipped off the cover I did a massive double take.  The saddle (while gorgeous) is nearly unrecognizable.  Partially because I ordered different blocks, but Prestige changed nearly every cosmetic aspect of the thing.  The padding, the flap, the flap design, the shape, lots.  Even their logo.. 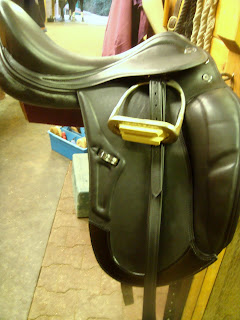 They managed to get rid of the weird scroll thing on the flap, so that's a win, but the balance of the seat looked drastically different when it was placed nicely on the fake plastic horse thing.  Regardless, I grabbed the saddle, threw my visa at the cash register and sprinted to the barn.

Pia had almost no appreciation for her new present (is this like when girls buy new lingerie but claim it's a gift for the guy??), but she did stand nicely while I slid it all around on her back and played with pad options.

It's wide.  It's really, really wide.  I know we ordered it slightly wide so that she can "fill out" into it, but this might be a little more room than we need, or even want unless we develop some massive upper level topline magically... but who knows.

Magic saddle fitter lady is coming out to double check everything so I'm not having an anxiety attack (yet).  Instead, I calmly tacked up (realized I need a new girth for the midget length billets) and got on.

Mind you, I've been a little apprehensive about whether or not I would still love the Optimax.  When I decided on it, I was just starting to ride Miss P regularly again, and my seat was a little looser than it usually is.  Also, I had been riding in close contacts, so my appreciation/awareness for the subtle differences in new dressage saddles was not exactly heightened.  Oh, and then there's the dilemma of riding in and loving the BO's Custom for the last 4 months.

All factors that were adding up so a slightly anxious feeling about having dropped tons of cash on a saddle I hadn't even looked at in 4 months.  Oh, yeah... on a saddle I hadn't seen in 4 months AND that Prestige modified after my fitting.   On paper I was pretty convinced there was no way I would feel good about this decision.

Until I got on. And just sank into it.  And just felt my leg drop right into line.  And felt my shoulders draw back more easily than they have been, and P moved forward, nicely, and with more shoulder freedom.

The rest of our lesson was really sticky and irritating.  But whenever we dropped back to basic trot work, P was moving better than she has in a while.  Probably partially because of her body work, and partially because of the saddle, and probably more than a little bit because my balance was more centered and anchored than I've felt in a while.

I'm calling it a win. And so far I love my weird moder-sculpture-looking new saddle.
Posted by Gingham at 1:32 PM