In theory I had a lesson scheduled for Monday and Tuesday, but the snow and ice means that The Boy and have been carpooling (his little Smart Car not so much in the weather), and while he doesn't mind stopping for loving pat at the barn, making him sit/stand in the cold for 3 hours while I grooooooomm, and warm uuuuuuup and riiiiiiide then groooooooooom again, seems sorta like taking advantage of his otherwise very tolerant willingness to stop by the barn on occasion...


Monday, we decided to brave the roads to the barn for a simple pat, blankie change and to let P stretch her legs a bit.  The BO assured me that she had been snoozing under cover in her shed, but when I showed up the mare was fully in the snow, gathering accumulations on her back and making her neck all soggy. 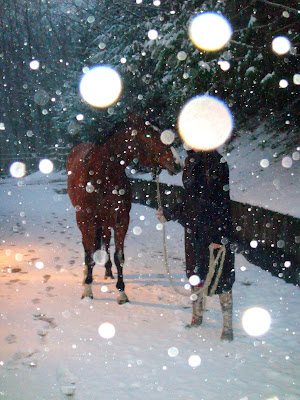 Uhhhh... World's largest snowflake conveniently blocking my entire face.
I pulled her blankets, picked some snowballs out of her feet and took her to the ring for a game of tag.  The Boy helpfully offered her a snowball treat, which Pia was significantly more interested in than would have imagined.  I mean, she doesn't like plain sugar, doesn't like horse cookies, prefers mints and weird candy like twizzlers... but snow? apparently THAT is delicious. 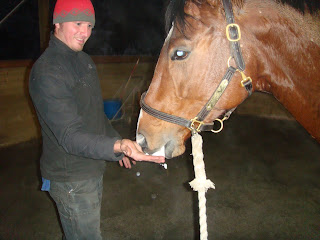 Crunch, crunch crunch...
After her snack, she willingly popped around the ring and played for a bit.  Her trot looks A-MA-ZING.  Seriously, might be in love with the weird Rolf voodoo... It's easy to tell that she's using her right hind a lot more than she was... interesting stuff.

In true non-girl-scout preparedness, I was in my not-so-insulated rain boots, and left the running and chasing to The Boy, while I stood by the gate and watched fairly amusedly . 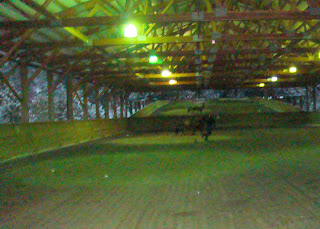 Chasing... More exercise than I was interested in at the time...
After some antics, we pulled the mare back in, groomed her up, shoved her full of peppermints and left her bundled up for the night.  She was not all that thrilled with the snow (aside from eating it), but I think that she's enjoying her winter wonderland. 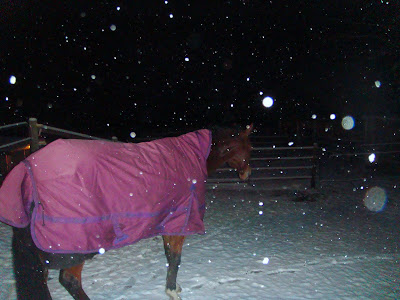 A big storm over in Sun Valley meant that we canceled our plans to fly out today... Instead, we'll hunker down at home, see the grandma and attempt to go cut down a Christmas Tree.

P continues to get some time off.. but hopefully the beast will be back to work this weekend!