I am getting desperately behind schedule in my posts and there's a distinct possibility that I've already forgotten the "helpful" details of late last week, but there's a good reason for that.

Namely, a 50mph good reason for it, and a semi-disasterous trip to my ever peaceful, "happy-place," cabin.

Usually I adore the cabin in the winter.  We just hunker down with a big fire in the wood stove and play cards or cook or read the days away. Adventuring across the harbor to town for some beers or a last minute grocery shop feels like a full on expedition, and every day is capped off with a nice toasty hot tub before bed.  It's sublime.

Instead of "wintery" we arrived to a full fledged winter storm.  Complete with small craft advisories (which our boat fully qualifies for) and some intense rip tides courtesy of a full-ish moon.  It was bitterly cold and the cold was joined by driving slushy snow and destructive winds....  I woke up Saturday to crashing waves, which (more specifically) had ripped the boat OFF the dock and were sending said boat crashing into the pier/ramp/rocks.

Me being the brilliant morning person that I am, I decided to desperately rouse The Boy and scramble down to the dock, scamper across the (half sunken) ramp that was shoved off the dock itself, and hop INTO the crazy crashing boat that was swamped with multiple feet of water.

It was sorta my own private Titanic moment, minus the exquisite evening gown, but hey, I do what I do.

What followed was a panicked (and in retrospect, exceptionally dangerous), boat rescue which involved some falls, slips in the water, screaming, and frenzied engine repair.  Attempting to start a finicky outboard motor in sub-freezing temps in 6 foot waves without proper outwear (or a bra, dammit), was... in fact, a poor choice.

We did manage to get the boat away from the crazy dock, to a safe harbor and home before extreme hypothermia set in, but dear god.  what a morning.

After that we battened down the hatches and just sorta settled in for some serious fires in the stove, viscous hands of cards and of course, homemade brownies.. 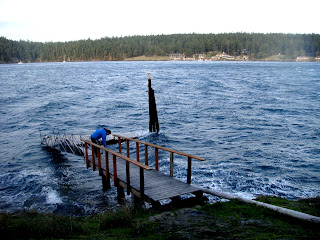 The storm continued to rage, and I'm sorta mad at myself for not taking some great photos of the waves and current, but here's a shot after we (sorta) got the ramp out of the water and the waves (sorta) died down...
Also, since the wind was snapping and cracking the big trees.  Miss Maisy decided that she was no longer interested in vacation and was very eager to return home, which she displayed by packing herself back into her carrying bag.... what a princess... 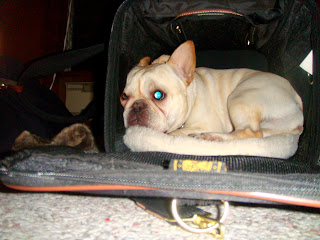 Pia had the weekend off.  We had a great ride Thursday (pretty loose), and Friday she got her first "rolf" session at the barn.  That warrants it's own post, but I really enjoyed watching the bodywork session, and her movement responding wonderfully.  The practitioner had lots of interesting observations and even some thoughts on P's funny right hind.

Now we sit and stare at the 1" of snow that is currently paralyzing the city.  Seattle is notorious for shutting down on minimal snow, but mostly that's because everything melts/freezes so crazily, that we end up with a perfect sheet of ice on everything instead of crunchy snow..  In fact, I never made it home from the barn last night (another poor judgment call) and instead crashed my my folks place just outside the city...


Hope everyone is staying warm!!
Posted by Gingham at 9:12 AM