We Came, We Saw, We Excused Ourselves..

So the first test of the day (Training 3) went decent.  We had some major bobbles (read: all of the canter work), but Prairie stayed in the arena and we got quite a few 8's when we pulled it together.  All good things.
But after we walked out of the arena the wheels started to come off the wagon.  P2 was getting cranky, she was sweaty and tired and hot (Seattle managed the first sunny day in weeks and Prairie wasn't sure why we were riding for so much of it..).
With three riders between my tests I wanted to just let P2 doze in the shade then wake her up with a few transitions right before our second ride, but she was having none of it.  She was fussy and pawing and flipping her head around.  To her credit, by the time we went back in the ring for our First Level 1 ride, I had been on her for over an hour (a record I think) and we haven't practiced much "standing around" then returning to work.

At first, P2 was braver about the far end of the arena.  We were able to trot (not fake-passage) past the judge's booth and around the other side.  But, sadly she was totally blowing me off.  It took all of my muscles to get her down to a halt, and I'm not sure that's how it's supposed to work.  I tried desperately to get her up and down in a few transitions, but it was clear that 2 minutes of tune up was not going to get us where we needed to be.

We entered.. nicely.  We halted, well! (aside from needing to pop up and look at the woods).  Our first trot sequence was not so bad - we got closer to the Judge's Booth and deeper into the far corner than in our first test.  And even though Prairie felt waaaaaay out of control, our 10 meter half circle serpentine thingy was actually pretty accurate and supple.  Then we had our first spook (arghhhh) which totally killed our balance and focus for our first diagonal and lengthened trot.  I didn't even both asking because it felt like I already had a running, unbalanced mess under me... then we had spook numero dos.  (terrifying horses on the hillside).  My response to that was to circle (you may note that First 1 doesn't call for a canter circle at that moment).  When we did return to the trot I hardly had a horse capable of her "stretchy" circle in front of the judge.. and she was in gallopy-gallopy-omg-monsters! mode anyway.

But I gave her a reassuring pet, got our walk transition (yay! brakes! they work again!) and free walked shimmied across the short diagonal.  My hope was that the free walk break would be a good "cooling off" moment and let us collect ourselves.  She moved back to the trot decently and our canter transition was strongly on the forehand but not totally discombobulated.  We managed our 15(ish) meter circle, although I thought my arms were going to be removed from their sockets, but then broke back to the trot at the far end again.  You can't really see it on the video, but she pops her head up and goes to the trot to (presumably) slow our entrance to the danger zone..

At that point I thought "damn," but I figured I could get our canter back in the next corner and complete our canter tour.  Mare blew me off, and when she did get her canter I all I felt was "powder keg."

On the video she just looks fussy.  But when you're on her, I swear it feels so big and so loose that I felt like she was about to bolt again hence (another) unplanned canter circle where our lengthened stride should be.

It was then (as I was making yet another error) that I excused myself as we trotted past the judge.  It felt like one calamity after another.  The judge gave me a quizzical look and a "but you're doing ok?" but I just felt like Prairie was winding up and not down - and  I was pretty sure I wasn't going to get a productive "school" out of the rest of it.

That being said, in watching the video a few times I've realized a couple things -

I suppose "retiring" is less common in the dressage ring than on the cross country course, but it felt like the same situation.  I wasn't handling Prairie well, and she was just reinforcing the idea that omg-everything-is-totally-scary-and-we-have-to-go-now-thanks-bye.   In that situation, I'd rather get out, go back to the warm up ring, get a few productive moments logged, then call it a day.

Anyway, Judge for yourself.  Here's the video of our aborted test.  I particularly enjoy The Boy's comments that "I don't think Prairie is getting any treats after this...."  LOL.  He's so smart..

Because that's not very enjoyable to watch, here's a few more pictures from Supermom.  I love her photos.  Somehow she found some pretty good moments in the midst of the meltdowns.  I would love to know what the hell I'm looking down at the whole ride.  Look up! Look up!!!!! 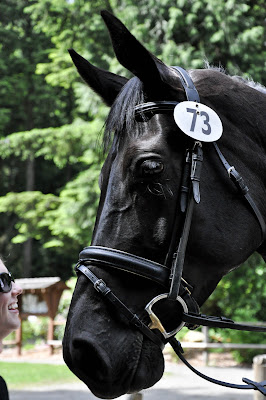 Love her photos.  really can't get enough... As always you can see more at Impact Decynes & Photography