A Weekend in the Country (English Pleasure)

Sorry for the absence.  I escaped town for a few days to gallivant around Idaho and hang out with Supermom while she showed her adorable young arab mare.

I grew up going to a ton of Arab stuff since both my Aunt and my grandmom were firmly planted in arab land (mostly saddle seat) for a good 15 years.  Although it was never my discipline, I always enjoyed following them around at Region Championships and a few times at US Nationals.  It can be argued that a horse show is a horse show is a horse show and that much like the chimp/human link 98% of what us riders do is the same (especially when trying to earn a ribbon), yet in that 2% the atmosphere, tack, personalities and general drama all shifts just a bit.

Having spent most of my show time in Pony Club or Eventing, I'm used to the sleep-in-a-soggy-tent-and-DUCT-TAPE-EVERYTHING mode of showing.  Which makes the sleep-in-a-nice-hotel-and-put-rhinestones-on-everything mode a very welcome change as I am no longer 12 and as such am significantly less enthralled with sleeping in mud next to my horse's ramshackle paddock than I used to be.  But I digress.

Supermom (being super, and also an ex PC'er) is probably the only arab person I know who travels to shows solo.  As in, without a trainer and huge barn to stable with.  I also figured that meant she might want an extra set of hands to hold her horse or hand her sips of water in warm up or whatever.  She did, so I escaped and spent a few days reliving the Arab shows of my youth.

I could go into a massive commentary on how confused I get at breed shows, but dressage is really just as subjective and ridiculous to the untrained eye so I'll skip that particular train of thought and jump straight to the important stuff.

Oh yes.  I shopped.  I thought that since I wasn't showing my horse, that perhaps I would escape 5 days of hanging out at a show with my checkbook mostly in tact, but alas.  That's wasn't the case.

The good news is, that like any well trained parent on a "business trip" (I took a couple meetings on Thursday so I could legitimately expense my airfare) I remembered to buy the "kids" (the P's) some goodies while away.

The first find was actually spotted by Supermom, but then promptly scooped up by yours truly in the name of all things sparkly (seriously, my lack of rhinestones was... glaring).  I've been keeping an eye out for a gun browband for the big girl, so the reasonable $40 price tag on this little thingy made it a must buy.

Then, while I was just pawing through the racks of breeches thinking "Gee, self.  You could really use a new pair of breeches to show in."  I magically plucked this pair of Pikeurs out of the pile and what would you know... they were in my size.

Being Gray and.... purple.  They sort of didn't fit the ticket for "show clothes" but my wicked little tack ho brain switched gears quickly to "did I say show? I meant to school in. Obviously you're schooling more than you're showing.  you need schooooolllling breeches.  And you need these ones.  See! your size!"

My frugal/ration/good voice of reason was absolutely nowhere to be found, so out flew the visa and away we went.

Aside from the minor cash hemorrhage, the show was a blast.  I got some much needed sunshine, girl time, and R&R.  Also, Supermom kicked some veritable ass with her mare and they got many of these big fancy neck ribbons. 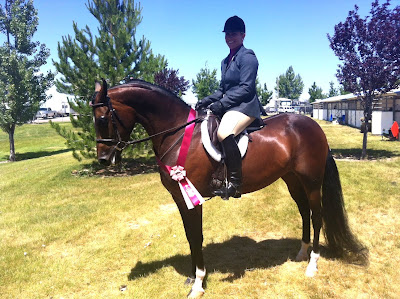 If there's one thing the Arab scene has down, it's bad ass ribbons.  Man, in eventer-land you have to win a flipping four star to earn one of those things.... Supermom did mention that warmblood crosses are getting very popular in the half-arab world... Maybe P2 could pop out something that would win a few garlands of roses and a neck ribbon or two...  Just sayin'

I popped out to the barn to pat the mare and make her grain baggies.  I didn't have time to ride on my lunch break, but we do have a lesson tomorrow morning, so you can expect pics of P2 with her sparkles then...