I've been on such a success high with P2 recently that I've been keeping one eye out for the totally-guaranteed-totally-humbling-horse-moment that is inevitably just around the corner.

It has to be right? that's why we have horses and not robots? To keep us on our toes with obstacles be they physical or mental.. or totally ridiculous never seen before outbursts? 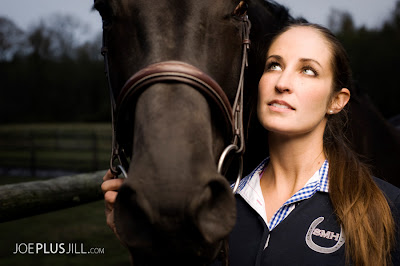 Nothing dramatic happened this weekend, but I got a healthy dose of humble pie with both girls that realistically brought me back into orbit with regard to expectations.

Prairie had a good schooling outing yesterday - but it lacked the "holy crap we're rockstars" feeling that I've been having so often with her.  In fact, I resisted the urge to smack her big giant beak several times.  She was a cow getting on the trailer, a cow tied to the trailer and a cow under saddle.  She was so braced during our jump school that I was bracing back and escalating our ride into a man vs. beast brace-off.  Which I can most assuredly say that Prairie won.

My tension was encouraging her tension, which I responded to with more tension and by under-riding my fences.  In the span of 15 minutes we went from sorta-amped-up to a total disaster zone of trotting before each fence, me taking my leg off and pretty much slipping through every corner in an inverted ugly mess.

Finally my frustration got the best of me and after running through a bending line like a standardbred I threw the reins, got off and gave her to S.

I still can't tell if that was a mature decision - to disengage, take a moment and regroup.

Or if I need to figure out how to do that without throwing the reins at my trainer.

I think the latter is preferable, but until I get there I'm pretty sure it was a good idea for me to get off for a minute and let S bring the mare back from outer space before I tried to work through a course again.

When I did get back on, it wasn't perfect, but I wasn't making things worse, either.  After a few minuets we ended with a nice soft course - and I gotta say, the last three fences were perfection.  Forward, soft, balanced, rhythmic, perfection.

Both in the ride, and in the bigger picture.  I need to regain my patience...

Those three fences gave me another glimpse into how incredibly unbeatable this horse is going to be in any ring when we are that relaxed.... But the ride in general reminded me how far away we are from that consistency.

With regard to P1 - I got a second helping of humble pie.  The Vet was out Friday to check on everyone and do some bodywork and Pia was in rare form. Bucking, rearing, biting, having a fit in general...  Or rather, I'd like to say she was in rare form, but over the last month or so it's become more of the norm.

And not a good norm.  I really respect my vet and she's been working with Pia through the entire Summer Camp adventure, so she knows this horse's ups and downs.  On Friday she was sugar coating a lot of observations but general conclusion was that having Pia back in a traditional barn isn't working out great.

Her body is doing well.  No signs of the pain or tension that existed back in 2011.. but the associated attitude and behavior is 100% out in full force.

I'm not totally sure what this means.  My vet was calling into question what mental issues might be at hand and how fixable they may or may not be.  Physically Pia is looking great, her scratches are almost totally gone, her weight is good, fitness good, all of that checks out.  From a neurological perspective, I know this horse doesn't have Wobblers.  She's foot perfect in the arena and on the trail, and she's catty as all heck.  But with regard to aggression and unpredictability, she's escalating rapidly.

All last week she was heinous under saddle, but Saturday she was a peach.  Wednesday she was okay on the ground for me, but Friday she was kicking at my head and baring her teeth at everything.

I'm just so saddened by the fact that P hasn't been able to transition back into the real world that I'm at a bit of a loss.  I'm coming to terms with the notion that she probably can't stay where she is, but I don't know where she will go.  Summer Camp might be a possibility - but only if she can go as a resident and not as a client.  We spent a ton of cash on that place and it's not a feasible retirement option.  Traditional retirement board might be an option but only if her demeanor steadily improves when she's there.  If she stays on the path she's on now I would be concerned about her safety and the safety of those around her.

Anyway, it's early in the thought process.  I have definitely not really thought about permanent options for her since I've been so focused on giving her a chance where we are.  But I think it's time to evaluate options.  She's not enjoying her life, and certainly no one is enjoying working with her.

Supermom raised the issue of potential ulcers which is something we are going to explore.  Her behavior is pretty consistent with the symptoms, but the follow-up question is what's causing them.. Her constant stress and anxiety? And if so, how do we resolve that?

Bah.  Lots of questions there.  I'm also trying to stay patient with Pia and allow a fair decision process.  On one hand I feel like I've been patient for the last (almost) 3 years.  On the other hand, I know that I tend to hit emotional walls and make wild decisions.  So far these decisions have been productive for Pia (and for me mentally), but we'll see.