So, this week has not exactly been "productive" in the traditional sense.  Fun, sure, but we aren't exactly making leaps and bounds in our training.

So, Tuesday was playday, Wednesday I was busy driving to and from Portland for some meetings, which meant that by yesterday I was STOKED to get to the barn and actually get on the mare.  I even justified leaving work at like 1pm in order to be in the sunshine and avoid the busy lesson filled arena in the evening.

I left, swung by my parents house were a BIG BOX was waiting for me from Dover (yay!) only to find my dad stuck on the couch with his back out.  crap.  Obviously I stopped my mad dash to the barn, made the poor man a sandwich (he had been stuck a while apparently and was hungry), called the doctor, called other family to take over and got out of there about 30 min later.

When I finally did  make it to the barn, I found miss mare and i found the hives. or bumps, or bites or who knows, but they were new.  a few on her neck (soI'm thinking bug bites) lots of her belly (uh.... irritation from her bedding? turnout?) and a few on her back/side under her blankie (NO idea there...). They weren't big, maybe the size of a dime, but I haven't seen anything like this on her yet... so who knows. Bugs seem likely, since she's SO thin skinned, but coupled with her increase annoyance at being groomed, my brain was thinking maybe this is something else?

SO, since I didn't want to make anything worse I decided against riding (HUMPH) so I just booted her up (new boots!) and headed to the ring for some lunging.  We put about 30 minutes in, then did groundwork again for her cool down and she was good and obedient (again). 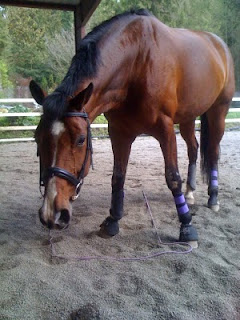 (P says, thanks for the new clothes. and also this lunge whip is tasty)
I still had time to give her a bath, so I did with that Eqyss stuff that is for sensitive skin and rain rot and dry skin and everything else.  The weird thing is that I could scratch the HELL out of her once her skin was wet. she didn't mind my fingers digging in (even on her girth line) with the suds and water.. weird right?

Then we went back to the sunshine to dry, where she got all sensitive and annoyed again when I would try to poke at her chest/girth.  what is UP mare?

Also, during the bath, the bites or hives or whatever totally went away.  they came back a LITTLE afterward, but not nearly as big.  also baffling to me.

Then, while we were drying in the sun, P decided that what she really loves is EATING SAND. she was face down, digging through the footing with her lip.  looking for.... grass?... gremlins?.... who knows. 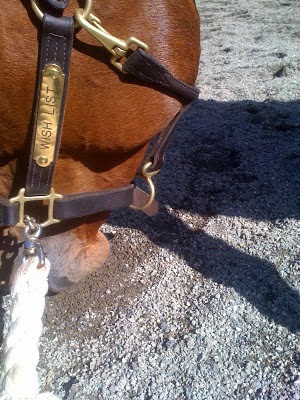 Headed out today to have a stand in trainer (Lisa from Rock Meadow) give her a ride.  I'm excited to watch. I like how lisa rides (super soft and gentle) so it'll be fun to see someone else on Pia's back and see her from the ground, since that hasn't happened for a while. I'll get some good video of that...

Till then I'm basking in the sunshine that's peeking in through the office window.
Posted by Gingham at 11:07 AM