I'm feeling a little behind the eight ball right now, but wanted to get a quick update on the Prairie-dog up before the wedding takes OVER my life.

The Boy and I had a fabulous New Year's with friends east of the mountains which included a lot of beer (and champagne) some bull riding and a fabulous Cowboy Bar for some dancing to ring in the New Year.  On our way home we stopped to see the new mare and squeeze in a quick ride.

The barn was "closed" for the holiday, so it was little difficult picking my way around a facility that I wasn't familiar with (light switches anyone??) but we found all the important bits and pieces and eventually got our act together.

Prairie was a cutie.  She's a doll on the ground, super sweet and soft.  Her two vices are licking (weird) and threatening to paw.  I hate pawing.  It irritates me.  Of course, I disappeared into the tack room for a few minutes and upon returning The Boy was like "Look! I taught her to paw for treats!"

grrrrrrrrr.  Apparently they will both be needing some training.

As for the ride... it was good! (eventually).  The mare was inside and not knowing when she was last ridden I opted for a quick lunge to check the energy level.  WHOOOOOO boy am I glad I did.  She was on fire.  Fun to see her really move though (the lady has some serious push).
Eventually I got on, and walked around the ring, but after a few larger spooks (there was a gray horse rearing in his paddock that cause his head to keep appearing over the arena wall like a jack in a box).  I got off, lunged a bit more and then hopped back on.  We finally got some good work in, but it was brief as we needed to hit the road in order to catch the season premier of The Bachelor (usually I don't care, but an old pony club friend is a favorite to win!).

I was excited for good pics, because The Boy brought his new camera (a Christmas gift for the Africa trip), but clearly we both need to learn how to use it, as something was definitely NOT RIGHT with the settings and the pics were almost all blurry.  (wah). 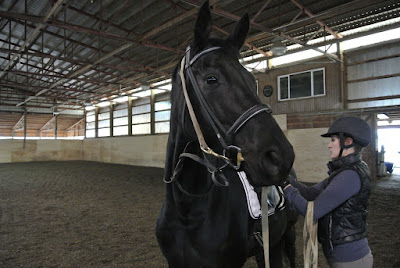 Nine days to the wedding! had a great day with P yesterday, just not sure I'll get it up here anytime soon..
Posted by Gingham at 12:20 PM