Yesterday I was thrilled to exit my manager meeting, grab a sandwich and shoot over to the BBM's barn.  The fact that we have a new office opening up 12 minutes from that barn is exciting, although I realize that the opportunity of doubling up on reasons to visit will expire in a few weeks...

Anyway.  I'm pretty sure the reason why we had a spectacular ride was because The Boy wasn't there to document it.  Which means the only evidence I have that I actually saw my horse are blurry and dark photos that very well could be the Loch Ness Monster...
The other explanation for a fantastic ride might be the fact that J tried out a new bit and it has been a miracle with Miss Prairie.  The real beauty in this discovery is that the miracle lies in a (simple, boring) Eggbutt Mullen mouth.  Easy enough.
Not sure what exactly it is, but the bit (combined with another 30 days of training and fitness) has the Mare sitting up nicely and not hanging on the contact.  She's under herself, happy with a steady rein, but not ripping you out of the tack like a 60lb pony clubber.

J thinks that the bit gives her more stability (which she likes, apparently this mare would prefer to be swaddled at all times if possible), so it has the added bonus of really quieting her brain down too.  She literally doesn't spook as big or as often in it.  PLUS (yes, there's more), it also seemed to make it much easier for me to keep her in my outside rein.

That progression is likely a result of 30 more days of training, but instead of fighting the whole ride to get her even and through in the outside, Prairie was already there.  It was just on me not to screw it up.

So what did we accomplish was our fantastic leg yields on the rail (so much cleaner).  Lots of our figure-eights. 15 meter circles at the trot and canter.  zig-zag leg yields down the quarter line (to the right, super.  to the left.. eeeeeehhh).  And our piece de resistance was working Prairie's walk-canter departs.  At first I was terrified, because our trot-canters aren't exactly polished, but I was thrilled (thrilled!) to discover that we actually have a pretty darn good walk-canter when I ask correctly.  With the lighter contact courtesy of the mullen mouth, she's really easy to scoop up into the canter.  And that makes me feel like I can ride again.

In the end it was a bit bitter sweet.  On one hand I'm even more excited to get the mare home.  But on the other, I'm sad to leave J.  She clearly is working well with Prairie-dog, and I have to give her credit for working with me too.  I enjoy taking  lessons with her and her method of explanation really clicks with my brain.  So that's too bad, but I'll just have to be diligent about returning for tuneups. 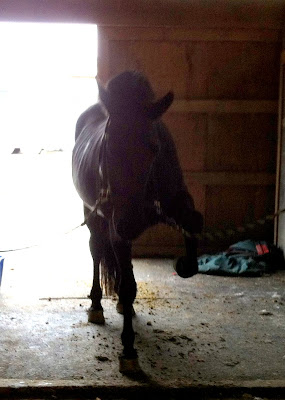 She's the cutest.  I hate pawing, but clearly she's been told not to.  This isn't an action shot.  Prairie actually just holds her foot in the air and desperately wants to paw, but politely refrains.

These photos are awful I know.  I promise I'll get the official photography back soon!
Posted by Gingham at 11:12 AM