Okay okay... so I'm more than a little late on this post - and if my pre-teen attempts at keeping a diary taught me anything (other than the fact that the locks on hello kitty diaries can be picked with pretty much anything), it was that the longer I wait to write about actual events, the less likely I am to remember any relevant details thereby leaving the opportunity for wild creative and assumptions.

I had to check my iCal to confirm when we actually took these pictures, but apparently I last saw Prairie on the weekend of February 12th.  I'm pretty sure nothing else exciting happened that weekend, but my angst filled teenage self would prefer that I insert some of melodramatic side plot in order to enhance the somewhat basic lessons we had.

I'd indulge that sentiment if every shred of energy I had wasn't currently being focused on digesting the mound of bacon that I so desperately needed to consume at brunch...

True to our previous visits we slammed out two rides - one after work on Friday, and one Saturday Morning before coming home again.  Let's start with Friday: 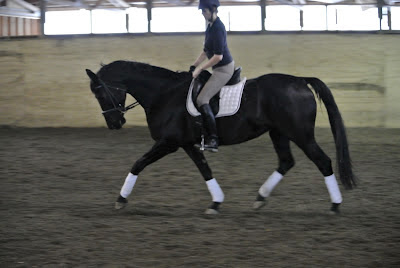 We started off much better than our previous trip, although, as the picture above shows.. we're far from perfection.  Hollow? usually.  On the forehand? most of the time... stuck on my left rein? yuppers.

BUT! more importantly, we stayed mostly between my aids.  Legs were on and functional, and I managed to get the mare off my hand much, much better than before.  Small victories.  Which must be celebrated when I feel as though we're still careening around the ring like drunk toddlers.

Anyway.  We started with our leg yields against the wall (decent), which are quickly becoming my favorite tool for really making sure that I have Prairie in my outside rein and I'm not cheating (too much) on the inside.  Then we moved up to our figure-8's in the trot, which were so. much. better. than before.  our change of reins didn't always result in me dropping Prairie on her face (good for me).

Sidenote:  The Boy also played with this cool slow-motion feature on our camera... it takes 5 seconds of real time video (taken at a crazy high frame rate) and turns it into about a minute of playback.  It doesn't do well in low light (also the indoor's lights cause a painful, seizure-inducing flicker..) but something tells me this will be fun to play with in some better light!

Our canter departs were lighter and less disastrous mostly due to the fact that I got my ass out of the saddle and let the mare just step up on her own.

By the end of the lesson when we were cantering to the left (my bad side), my left rein was on full lock down.  My hand had turned into some sort of claw gripped to the rein and my elbow was braced.  Did I know it? yes.  Was I aware this was not an effective strategy to balance the mare? absolutely.  Could I release my death grip on the inside rein?

Not even a little bit.

Of course, then J pulled a mean old pony club trick and removed my left glove, exposing the somewhat raw screaming blisters that were already starting to form as a result of my clenched claw.

Mean.  But effective.  I literally had no choice but to let up and stop reefing on the left rein - which (to no one's surprised) ultimately helped soften the mare.  Sigh.

We squeaked out a few "good" transitions and called it a night. 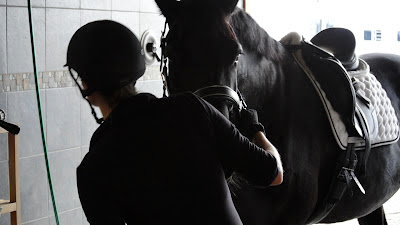 Saturday we basically repeated the same exercises, but with a slight improvement (apparently my gangly, horse deprived body can be taught!).

Leg yield on the rail, into figure-8's with lots o' transitions...  After a few drama-llama moments, I was actually feeling pretty darn good.  I'm not exactly amping up the impulsion or lateral work, but I am feeling like I am at least getting a feel for the mare and starting to lose the sense that I'm out of control 90% of the time.  Am I repeating that fact? I apologize if I am, but even though I know it's not impressive - it's really contributing to me not feeling like a total moron.  Which I like. 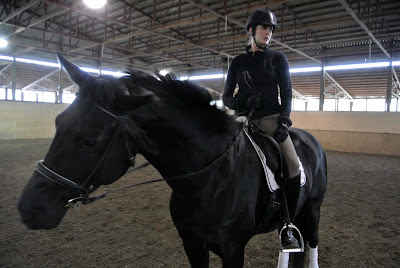 She's adorable. I'm excited to get a ride in this week...

Here's a clip of our leg yield on the rail... I'm not doing a great job of catching her when she tries to avoid my outside rein... but I'm getting better and I can't cheat.. so thats good too..

here's some figure-8's from Saturday: