Wherein I Fall in Love (again) with the Prestige

Weekends away with friends are always a welcome break to the routine, but after four days away from the Big Mare and more wine than any normal human should consume, I could hardly wait to get my little wine-addled self out to the barn to ride last night.  I guess technically I didn't wait, since I sort of abandoned my post at work at... ohh... 3pm when I couldn't think of anything I could do that would be more productive than currying 4 days of crap out of Prairie's coat.

I was also anxious to see how well the Mattes correction pad would work and if it might render the Prestige a viable option while I wait for a  mind boggling eternity 12-14 weeks for the new saddle to arrive...

Mondays are usually pretty darn quiet out at the barn, but I was surprised to be the only person out visiting her horse at 4pm.  But with all the horses in and munching their early dinner hay, barns never feel lonely even when everyone else is gone.

Anyway, the Big Mare greeted me with a nicker (a nicker!) and was wondering where all of her treats had been all weekend.  We tacked up, I fussed with the Mattes pad and when I got it where I thought I needed it, we headed for the ring.

Our ride was AWESOME SAUCE.

Maybe it was the rebalanced saddle and me sitting upright like a real person.  Maybe it was the addition of the softer field boots and a much steadier leg contact wrapped around the mare's belly.  Maybe it was S's schooling over the weekend that left me with such a soft, happy mare... Whatever it was, it was awesome and I loved it.  Not a single scoot, not a single spook.  Just a forward, steady ride.

Mostly I lallygagged around enjoying how easily the mare was going, but we did work for a few minutes.

We worked our canter transitions, which must have been schooled hard since they were pretty darn clean.  If anything, Prairie is getting overly sensitive to the downward half-halt and wants to break to the trot a bit.  But that's a problem I can work with. Especially if I put some spurs on...

After that we played with some leg yields and shoulder-in (both mucho better with me sitting up) and after stringing both of those together with some small 10 meter circles and trot-halt transitions, I let the mare be done.  No need to hammer it home when her first effort on everything was right there with me.

I'm sure that I was riding better and able to use my seat and weight more effectively for the lateral stuff.  I could still use a bit more bend in the shoulder-in's.  Prairie's tendency is to turn them into a baby leg yield on the rain and stay straight... so that's something to be mindful of as we go forward.

The Mattes pad really did let me alter the balance of the saddle a bit better than my Thinline pad did.  It looked good from the ground, but man - the difference in the tack was huge.  That feeling of being tipped forward was gone, and after a few weeks in S's CWD, it was nice to feel like my leg was stretching down and really around Prairie's sides.  I should have done some work without my stirrups, but I can save that for later in the week...
After our ride since we were literally the only one's on the property, I decided to do some Cowboy Man inspired groundwork and ended up untacking/grooming/etc with Prairie loose in the aisle.  She didn't even try to wander off and responded very immediately to any corrections if she started to lean away or shift her weight away from me, but I opted to give her a little snack just to reinforce that it's fun to stand loose in the aisle while I poke around at her and clean tack... 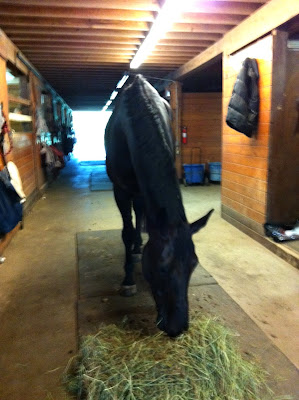 I did get nervous that someone was going to show up and admonish me for the naked horse in the aisle, so I eventually put a halter on, but left her untied and happy with her hay.

This week I only get to ride Mon, Tues and Wed, since Thursday I'm off to Idaho to help out Supermom at a show and hopefully hang out with SprinklerBandit!

Oh, also, we entered our schooling show for July.  Same tests- Training 3 and First 1.  This time the goal is finishing both tests...
Posted by Gingham at 11:10 AM