Our little foray into Hunter-Land proved mostly successful and hugely fun.  Partly due to P2's admirable attempt to be a nice lazy Hunter, and partly due to how fun it is to haul out to a show with friends in tow.  Prairie was lucky to have both 4 legged and 2 legged friends and fans out watching her go's in the little-teeny-tiny baby ring at the show.
Saturday before the show I had the pleasure of hosting SprinklerBandit and her friend while they cruised through Seattle on a horse-shopping trip, so The Boy was treated to a bevy of horse-gals when we all sat down to evening cocktails and snacks (also joined by Supermom and Denali's Mom).

He gets full marks for not running away - or totally tuning out as we started extolling the virtues of various pieces of tack.  (For the record, the bridles came, the Aramas is gorgeous and we're keeping it.  Full review to come shortly)

But back to the show.  We had fun! I forgot what it's like to not have a 3:30 ride time, so I was a touch cranky at 5:30 when the alarm went off and even crankier when I couldn't hit snooze 8 times without missing our first ground pole class.  (teehee.  ground pole!).   We had a little bit of trailer drama loading some other mares, but once again The Boy proved his worth as profession butt-tapper and horse pusher helping to cajole the cranky mares into the big metal box.  Prairie loaded well and without incident, and was extra pleased to have S's little lesson pony as her companion.  Izzy (the pony) was adorable and I regret not taking pictures of her butt next to Prairie's butt in the trailer.  Too cute for words.

All in all we had 4 horses with us for the day.  P2, Izzy, and two cute mares who belong to another of S's clients.  Enough to keep us busy all day long but still manageable.

P2 had seven classes on her dance card.

Enough to keep us busy :)
The first couple ground pole classes were awesome.  P2 didn't really warm up, but she trotted around her "course" politely and evenly.  She still likes to pitch herself over the poles, but she totally refrained from spooking at any monsters in the bushes or anything naughty like that. For her efforts she got two blue ribbons and two "first place carrots"  which she promptly devoured.  The first place for her "hunter" round is a little suspect, since I accidentally taught Sabrina the wrong course.  The ring steward let her back in for a do-over which was very nice, but then S accidentally snagged the wrong "line-diagonal-line" combo and ended up off course.  Two very nice rides.. just not correct ones.  Either the judge didn't notice or really no one cared.  Regardless, Prairie wasn't going to give her carrot back.

We had a brief break which involved lots of standing around until our Cross Bar Division started and S took her around two more times.  We ended up 2nd and 3rd which was fair since P2's brakes stopped working about halfway through each round leaving S with a less than consistent stride.  Prairie did manage to sneak in the correct 4 strides in each line, but it didn't look... effortless.  Still - no major spooks or bolts so I was really pleased.
Then the real challenge came as we sat around for 3 hours waiting for the Junior divisions to run before our 18" classes.  I took Prairie back to the trailer a couple of times to let her nibble and drink, but mostly I made her stand nicely in the shade and be patient.  I kept waiting for her little egg timer to go off and for the tantrums to start - but for the most part she held it together.

Every now and then she'd get antsy and started pawing around, but she's usually quiet back down after a few minutes and start dozing again. 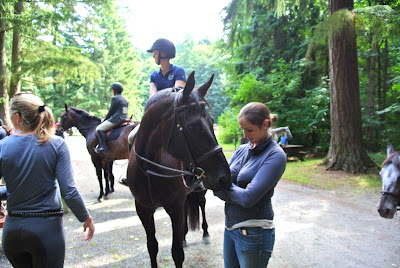 S finally hopped back on for a bit of a warm up and I got to play jump crew.
For the record "jump crew" meant I shoved a burger in my face while adjusting a small warm-up fence from an X to a vertical.  I thoroughly enjoyed that responsibility.
Finally it was P2's turn again.  Based on the total lack of brakes with the Cross Bar classes, I switched her bit from the double jointed D-ring to a chunky slow twist full check.  Not much more bit, but we were hoping to canter the whole course without developing a huge, slow freight-train-running-canter.  It seemed to help and Prairie put in a decently even, good looking course.... until she decided to just go around one of her jumps.  It wasn't a particularly dirty runout, but it was a runout which is naughty.  S re-presented her and finished the course smoothly.  Their second round back in was without errors and given all 10 days of our experience with courses looked pretty decent!!

S opted for a few simple changes, since P2's flying changes can still result in some confusion for the mare.  I think that was a smart decision and it gave Prairie some nice, calm, confidence building rides - which was our primary goal for the day.

We finished with one little flat class for the experience.  P2 has made it known that she doesn't exactly love being ridden in traffic, a preference that she needs to get over.  This division cracked me up because it ended up having a few big horses lumbering around, along with some of the cutest little ponies and their cute little 9 year old riders.

Prairie won the class (not a large, or fancy class), but I did feel a little guilty about beating the adorable bay pony.

I finished the day totally exhausted from nothing more than standing around holding horses.  But I had a blast! And I'm so super proud of my big dressage mare.  She was calm, level headed and played along well.   Next time we do this.  (since P2 now has a fancy hunt bridle there will be a next time..) I'm going to aim for the "big" ring and enter the 2' Division. That way she has to deal with the grandstand and pretty, well decorated fences.  Also, the arena is about three times the size of where she was on Sunday, so we won't have the benefit of such a contained space.  But I think we are up for the challenge and I'd like to up the ante a bit.

The Boy was proud of our girl and was glad to respond with "no.  She's not for sale" to a couple of inquiries.

Next on the docket is another Dressage show in two weeks on August 12th.  I sent my entry in to ride First 1 and First 2.  I'd like to try to get to another Hunter Schooling show, but we have weddings on the weekends that most facilities nearby are doing their "august" shows.  There's a "C" show we could hit in September, but we'll see....  For now, it's back to the Dressage saddle and focusing on increasing our impulsion and keeping our canter uphill!