I finally made it home with time for one ride on Saturday before we loaded up for our second schooling show on Sunday... which was enough to leave me with some slight anxiety about not being exactly... prepared.

But, such is life, and some of my best rides have come on the heels of total procrastination which is what I was telling myself all morning while I was trying to bathe/clip/braid/tame my somewhat feral looking beast.

S had the ride for the week, so I knew I wasn't dealing with a wild mare, but I was still feeling a bit... disconnected while I scrambled about waiting for The Boy to show up with the rig.

But Prairie was a good girl.  She (mostly) stood nicely while I put her braids in.  This round of braiding was light years ahead of my last attempt, which makes sense.  It's sorta like painting your nails... when you do it all the time it's quick, easy, and looks better than when you started.  But if it's been a while I typically end up with more paint on my clothes/table/skin than on the nails themselves and it all looks moderately tragic.

I opted for a few more braids this time (maybe 10 instead of 7?), and I think that was a good call.  They still looked nice and "chunky," but they were tighter, more even and looked a bit more proportional to the mare's body. 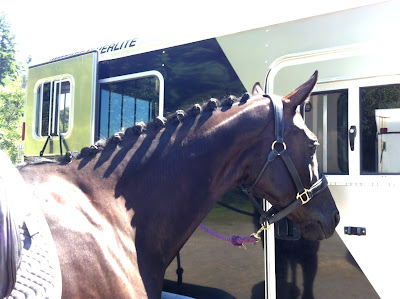 Our ride times were almost identical to the last show - Training 3 at 3:05 and First 1 at 3:40.  So given the lack of focus/attention at the last outing my plan was to get on about 10 minutes before my first ride and have a quick, tight warmup, then ride my test and hop off until 10 minutes before my second ride.

Great plan, except that they show was running about 20 minutes ahead so about the time I was ambling down to the warm up area the gate girl was running around asking everyone if they were #103.... (oops).

Since I had time, I still hand walked Prairie around the whole place, then hopped on, tested my gas, my breaks and both canter transitions and headed into the ring....

Instead of letting Drama Llama/Loch Ness monster crane her head all about, I kept her frame as tight as I could, and asked for leg yields, shoulder-in's and haunches in/out.  The theory being that when I let P2 look around, she convinces herself that there are things worth looking at... like cougars... and tarps... and horse-eating children.

All in all, I felt like I had way more control as I tootled around the dressage court.  The bell was rung pretty quickly so I barely got all the way around before circling back and heading for the Centerline.  P2 was alert and listening, but already heavy on her forehand, which is what I struggled with the entire test.

The Judge gave us lots of positive feedback after our final salute and asked a lot of questions about Prairie.  She was surprised to know it was only our second outing and that we were a new partnership (I guess that's a good thing?).  We managed a 2nd place against much stiffer competition and our score was a 66.4%.  (a whopping .2% less than June)

In terms of the scorecard - it made more sense to me than June's test.  We only got one 8 (on our medium walk) whereas in June we got 8's on the same medium walk, our second trot serpentine, our right lead canter circle and the final centerline.  Buuuuut, we also totally eliminated those dreaded 4's and I managed only one 5 (that damn right lead canter that squeaked out an 8 last time..).  Otherwise it was mostly 7's with a few 6's sprinkled about where they were well deserved.  Big improvement on the back side of the test (as far as I am concerned) with an 8 again for Gaits, a 7 for impulsion (we had 7.5 in June), 6 for Submission (same as June) and all 7's for Rider Position, Correct use of Aids and Harmony (a 7, 6.5 and 6 respectively in June).

P2 was a bit sticky, so I wasn't expecting to see the glowing feedback in impulsion, and we were still fighting over focus and harmony so 7's seem fair.  All in all, we got 6's on everything that we struggle with at home, and 7's/8 on everything that feels a bit more solid.  I came out of the arena really pleased that Prairie held it together and listened for all five minutes of the ride...  That made the little bobbles not very important in my book.

I was really proud with how well Prairie bucked up and listened.  I knew we were heavy, and I really didn't do much to fix it.  Instead I sort of just hung on and hoped that somehow magically she might get lighter on her own (because that always happens...).  Also, she's still overly interested in things that aren't related to her test... in the video you can see us pop up a few times (particularly in her free walk), but it's a polite "what's that?"  which is a far cry from her inability to trot past the Judge's Booth a month ago.  I don't quite feel like our score reflects the massive improvement, but I am pretty sure our score was too high last month anyway. :)

Anyway, here's the video.  Not bad for 3.5 minutes of warmup!  I'm going to try to replicate such a quick warm-up at the next show too...

After the ride I hopped off as soon as I could, loosened her girth and found some shade to snooze under until we were one rider away for our second ride... More on that tomorrow, we had a BIG success in that test, stay tuned!