So, I had a lovely lesson this morning (aside from the twinge of a hangover lingering on the right side of my brain due to an evening with Supermom and a few bottles of wine... eesh).  S had us get in the jump tack in order to work on P2 landing on the correct lead after fences.

Since our next little hunter show is two weeks out we both agreed rather than over school changes, we might as well work on just getting our leads in the first place which make changes somewhat irrelevant.

We warmed up with lots of transitions again, asking Prairie to collect and sit, which she is getting pretty good at.  She's also getting really good at anticipating, and doesn't like to stay "on her butt" for long.  So her little dance shuffle as she anticipates the transitions, is less than charming..

Either way, we worked on lots of up and down transitions, some leg yield against the rail for some straightness and some counter flexion to keep everything decently soft.

Prairie was moderately distracted (first time back in the indoor for a while) which resulted in some regular inversions and braced moments that I wasn't as quick to correct as I wished I might have been.  She's also starting rooting (wtf?) like a pony and I feel like a toddler when she yanks me out of the tack and throws her nose on the ground.  It's not very polite and I'm ready for that particular evasion to go away....

Eventually we set up a little vertical and focused on just trotting in (super straight) and cantering out on the correct lead.  P2 did well.

Then we moved the vertical to the centerline so that we could change directions and start to ask for the new lead over the fence.  Starting left, and staying left - no problem.  Starting right and changing to the left lead - no problem.

But starting right and staying right..... that.  That was a problem. Every time we landed P2 took the left lead.

I balanced and sat up - left lead
I lifted and opened my right rein - left lead
I closed the CRAP out of my left leg (to try to trap her haunches) - Still, the left lead.


NOTHING was getting us the right lead.

Finally I asked S if it looked like I was pinching my knees (my lower leg felt rather swingy..) she said no, but I could get more (left) leg on the mare.

Right knee... totally fine.  But then again, so was my right leg.

Left leg - was absent and letting Prairie skootch her butt over and fall on her left lead.  d'oh.

Finally I gave up and let S try her over the jumps.

Turns out when balanced, packaged and some exxagerated left leg, P2 will land on the right lead all the time.

Which brings us back to my crookedness and my pinchy knee.  Dammit.

This has never been something I've noticed before, but the blister doesn't lie. 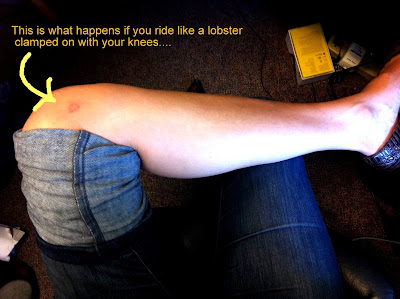 I've got to fix this lower leg.  and quickly. Humph.
Posted by Gingham at 4:51 PM