As predicted, there are always extra costs that sneak up on you in preparing for larger horse events, so I figure it's time to add those in.  My original post True Costs of Big Shows Part I talked about the anticipated costs for three weeks at Thermal, but left the door open for more expenses...  This is definitely the point where if I weren't blogging, I would deliberately not add up all the expenses and avoid seeing a final tally at all costs.

But in the name of being honest (both with myself and the blog), I'm trying really hard to keep track of our expenses and report them faithfully.  This may result in me never, ever, ever hauling across states for another multi-week show ever again, but who knows.

The additional checks that have been written in anticipation of Thermal fall into two different categories.  One is "new gear" for me and Prair and the other is Medical.

The "new gear" can be argued that it's not a true Thermal cost since it will continue to be used after, but Thermal definitely triggered the purchase, so I'm choosing to include it.

All of the new gear is either because we are at a new barn and I really like to match, or because I'm pregnant and really like things to fit.

I didn't go crazy on the matching Barn Gear, but I did get excited and ordered some stuff - specifically a stable blanket and stable sheet to be embroidered, as well as a trunk cover and coolerette so I feel like a cool kid.

Purchasing these items didn't take significant arm twisting since we all know how I feel about matching - but they still required dollars to come out of my pocket in concurrence with other Thermal costs.

Granted, they are a one time cost (hopefully) - but they still hit the bottom line...

It helps that the barn colors (hunter green/burgundy/beige) are relatively common, so we are able to use SmartPak for the barn blankets, which are an affordable $96 for the blanket, and $79 for the sheet.  Additionally, we send out for our own embroidery, which cut costs a littler further.
The Trunk Cover and Coolerette are both made custom by The Clothes Horse, which is decidedly not the cheapest outfit around, but their products are gorgeous and really well made.  Since we're able to avoid custom costs for the show blankets, I didn't feel quite as bad about forking over the $$ for some nice Clothes Horse Items.

I ordered the Deluxe Trunk Cover in order to match the rest of the barn.  My costs ran a touch higher than listed since my Trunk is an unusual (large) dimension.  The notion of spending $220 on a cover was a little much for me, but I'm not ready to invest in a matching trunk so it seemed like a good compromise.

The Coolerette is mercifully cheaper ($100) and although it's totally unnecessary, it is kinda fun to have your name displayed in such a classy fashion.  Really makes you feel a part of the team.
In addition to the new clothes for Prair, I also pulled the trigger on a new huntcoat for myself to accommodate my, um... increasing topline.  So far the belly is a non-issue, but the boobs are not going to cooperate with my current closet of show clothes.  Both Dover and SmartPak have some great, affordable options, and I ordered myself the R.J. Classics Essential Show Coat. 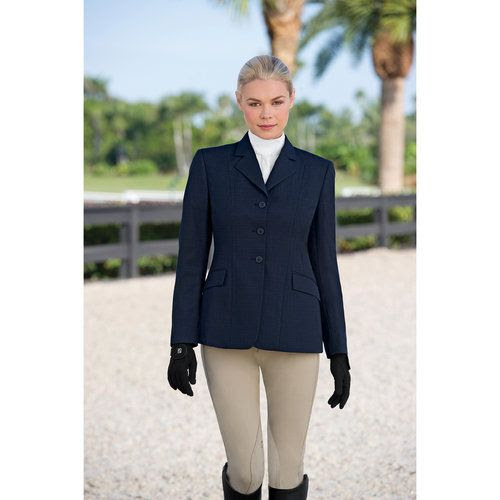 It's not fancy, but for $99 I'm hoping it'll do the trick while I have some baby-induced-weight for Thermal, and just in case it's still hanging around next year when I'm able to show again.

I have never purchased an R.J. Classics coat before, so I'm not sure what to expect, but it is one of the only jackets I was able to find that came in a "long" and stayed under $200.

More significantly, I must have been feeling extra maternal this weekend as I decided it would probably also be wise/kind to give Prair a round of GastroGard for the big trip.  Her tummy has remained in a bit of distress since moving barns and she's an anxious enough mare (sounds redundant) that I think GastroGard is a good proactive step to take for hauling so far and then being in a show environment for so long.

The 28 Day Pack is another cool $900 out of Prair's piggy bank.  Not nearly as exciting as fun new blankets, but probably more important - and frankly something that gives me peace of mind for the days I'm not able to join the mare in California.

Finally, I think Prairie will likely go on Regumate for the show (and potentially other shows this season).  Our barn is sending almost exclusively mares down south, so I can only imagine what the herd bound drama will be by the time they unload.  Additionally, N always requests to be stabled at the very far end of the barns where there is less hustle and bustle to bother the horses, but exaggerates the terror of leaving your friends and walking (forever) to the show rings.

We know how I feel about hormones, but my biggest goal is to give Prair a good, positive experience, and I am thinking that controlling her raging mare-moments might help that process.

Big bottle of Regumate will run $270, and while that allows for three months of continuous use.  So really, only 1/3 of that cost should be earmarked for "Thermal," but much like everything else, I'm not prorating :)