When In Doubt, Daydream

So for some inexpiable reason, my brain has been on overdrive thinking about what things I could get for the next time Prair and I set foot in a show ring together.
This must be some sort of defensive evasion to avoid thinking about practical things, like where I should start storing diapers or how many bases for the car seat we actually need to buy... but since we've already confirmed that baby gear is terrifying, (even though some of it is ridiculously cute), I remain more entertained by tack and show clothes and things that go on the ponies (not all that shocking..)

So let's get back to the horsey stuff:

If I had a magic wand, there are a few items on my wish list for the 2015 show season.  Now, I fully acknowledge that even I, an accomplished impulse buyer, might have to adjust my irrational horse spending upon the arrival of Baby Girl, but that doesn't mean shit when I'm window shopping or day dreaming (thank god).

1) A new show helmet.
Yes, the GPA Speed Air is in great working order. I haven't crashed on it (yet), and I love it for schooling, and it's still within it's recommended lifespan.  but it doesn't ooze Hunter.  And since I have every intention of making into the rated divisions, I sort of think we might need something with velvet.  (ooooohhhh ahhhhhh).  The industry leader in this (under represented) style would have to be the Charles Owen - who has a couple velvety options to choose from.  Their tried and true option remains the Hampton - I still see this hat on a lot of amateurs (though usually ones over 35) at the shows.  And while it lacks the modern styling of all the JR8/V8/AYR8 helmets... I sorta love it?

I figure if I'm going to go old school traditional, I might as well go really old school traditional.  I miss velvet hats (though I don't miss keeping one clean on a daily basis), so part of me wishes there were more options for this style... The last velvet I had was a Troxel Grand Prix (which they apparently still make).  I suppose it could be an option, but the harness and finishes look a tad less sophisticated, which sort of defeats the purpose since this purchase would be 100% based on aesthetics.  Truth be told CO has actually really expanded their velvet offerings recently and includes the Wellington Classic, H2000, Fiona's Hat (my personal fav, and pick if I can find it) and the ShowjumperXP

2) New Boots!
I know, I know, shoot me now.  How many times have I talked about boots! (the answer is almost as many times as I've bought boots... as evidenced, here, here and here ((and maybe here and here too)) ).  But, much to my dismay the Treadsteps have dropped more than I hoped (though I sorta thought that would happen) and while I still really enjoy their look and style, 100% custom, they are not.

Much like the GPA, I am thrilled with the comfort and function... but if we're being super picky about appearance... I could make a couple improvements.  Shallow, I know. but BOOTS.  God, I love boots.  Any excuse to shop for boots....

I'd probably go with Konigs, which I have a deep fondness for.  My Konig Dressage Boots have served me well, as have the super-sale-field-boots I snagged a couple years ago.  I just love the traditional lines, and the quality of the leather.  Plus our local tack shop carries them, so I don't have to go show at WEF to get a fitting :).  If we're really aiming for the stars, I'd go Der Dau and never look back, but... well. Since I know myself and any "forever" solution really only seems to last 2 years for me at this point - the Konigs seem like a prudent splurge (oxymoron?) and they would do just fine. 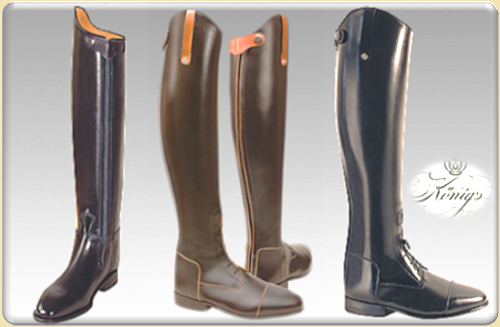 There are so many beautiful coats out there and so many wonderful ways to order a unique (yet traditional!) jacket that I'm just drooling over the opportunity.  I suppose the silver lining of potentially not losing the baby weight right away would be that I might "have" to get a bigger coat.  oh darn.  My Grand Prix that I found on sale held it together in Thermal at 22 weeks preggo, but if boobs or belly are any larger than that benchmark when I want to show again... we'll be on the hunt.

Clearly I'm on a traditional kick, but there are some fun options out there to sneak in if you have the time/money/inclination to go semi-custom.  I saw some beautiful coats by both Grand Prix and Pikuer down in Thermal that I thought looked tasteful, yet modern.  I think my next coat color is Navy, and I'd be tempted to get some piping on the pockets or possibly the collar in a matching satin.  Most bold contrast is too much for the Hunter Ring (IMHO), especially for an Ammy doofusing around the small ring.

Contrast collars and too much flash with piping or stitching or buttons can come off as pretentious to me.  Sort of like when people put hunt colors on their boots without having earned them.
Disrespect.

4) Show Pad! I like Prair's half fleecey pad, and in fact I think she looks simple and classy in it - but unlike my old saddle, the new CWD actually fits most contour pads and I'm sort of tempted to order an Ogilvy pad to show in.

Necessary? god no.  But you know what they say.. No Back, No Horse... or something like that.
I know the Ogilvy bandwagon is overloaded with followers, but I really have to say that I remain thrilled with my half pad.

Prair's back is so touchy - and it's wild, curvy shape is so hard to fit - that the squishy, squashy Ogilvy pad has been a god send.  I'll wait to see how the new saddle finishes breaking in before really pulling the trigger on this thing, but I can see it being the "smartest" buy of anything on this list.  Maybe because it's the only thing that would be driven by function rather than just a wardrobe upgrade?? (oops...details).

But, like everything else, this is just a wishlist, a current collection of whims as I watch Miss Prair work from afar.

But really, would it be responsible to show up to defend our Circuit Championship at Thermal with anything less??? I think not. (oh, did I mention that I'm already thinking about Thermal? which The Boy consistently reminds me was "sold to him" as a "one time only" event??  Did I say once in a lifetime??? I maybe meant once a year....)

As for everything else, I've got plenty of breeches and... um gloves? to see us through another year, so clearly I'm not thinking about a totally new wardrobe (what? gloves totally count...) because that would just be ridiculous.  Come to think of it, no need to hunt for new shirts either since I have my (favorite) FITS show shirts, from TOTD...

We clearly have time to change our minds here, so don't be too surprised if this list changes/doubles in size/becomes a monster, but these four items have been rolling around in my brain and are fun to keep an eye out for...