The day after I saw Prairie last week, I made my way to go see the original princess P herself out at camp.

I know I can't keep P there forever, but as mush as I wish I saw her more, I really do enjoy my days out at her camp. I love the ferry ride, I love the drive and I really, really like her barn.

When I got to P, she was happily munching hay with her newest Beau somewhat removed from the rest of the herd.  I can't remember how much detail I went into Knight, but he was the big brash gelding who was introduced to the herd for the first time during my last visit to see P.

Apparently the lust-at-first-sight has stuck as P and Knight are now a bona fide herd of... 2.

Knight is apparently choosing to start his own herd instead of challenging anyone in the existing herd.  He hasn't successfully stolen anyone else away from Boss Mare Rose (aside from P), but he is definitely a force to be reckoned with.  Since P is currently his only mare, he's... protective of her especially when she is in peeing, flaming, obnoxious heat (as she was when I saw her).

Knight is pretty studdy (lots of neck biting, etc) so I can imagine that this only encourages poor Pia to continue down this ridiculous road.  I cannot emphasize how ridiculous her displays were, except to say that the notion of separating those two terrified me, as did the notion of strapping a saddle (or anything) to her back.

As it turned out, P didn't really mind leaving her boyfriend.  She was a little edgier than normal, but still well behaved with her snacks and stood nicely for her hind toes to be trimmed up.  Knight was less amused by someone kidnapping his beloved and thought it would be helpful to blow the the electric fence, not once, but twice.  (dingbat).

P decided that a tarp up in the hayloft was probably going to eat her, so we paused before tacking up and took the opportunity to play with said tarp a bit.
P was a star.  She managed to correct herself from DEFCON 1 to "that tarp is loud and sort of irritating" in about 10 seconds.   At this point, I am happy to accept 10 seconds as an appropriate amount of time to think about the tarp and then correctly assume that it is not an immediate threat to survival.
(here's a quick video of P and her tarp.  Also you can see her new bf.  He is much more impressive than the ratty paint she attached herself to last time)

Having safely negotiated the tarp (and put a fence between P and Knight again..) we tacked up and got ready for the trail.  We returned to a park where I've been before, so I had a decent understanding of the lay of the land.  Lots of hills, lots of changes from dark forest to open fields and some fun logs and obstacles to work the ponies over.
Cowboy Man and my vet have basically figured out that P's still in some pain when she has to go downhill, but that otherwise, any objections or balks are mostly behavioral.  So, we were empathetic with hill work, but sticklers when on the flat.

All in all, P was a pretty good girl.  She was brave for the first part of the trail, did some nice gait work out in the fields, then politely accepted some hills - showing some signs of discomfort toward the end of the ride.

The big breakthrough here is that P can be "ouchy" and grumpy on the hills - but... instead of staying escalated and angry.  she (gasp) is able to relax again when the discomfort goes away.

This might sound extremely basic, but the fact of the matter is that a year ago one of our big struggles was dealing with P's short fuse and trying to bring her back into the atmosphere after something (anything) set her off.  So, this is the sort of progress I really like to see.

The biggest test came at the end of the ride when we had clearly returned to the parking lot with the trailer.  CM asked P to set off down the trail again for another lap and she disagreed.  I'm sure she thought that we couldn't see the (big) truck and (bigger) trailer just 20' from the trail head and that clearly the (idiot) humans were lost (again).

But in point of fact we did see the truck and trailer and simply wanted to reinforce the idea that P works until we are done working P, even if P thinks that's stupid.

So, P dug her feet in, bit her chest and stretched her weird neck out to give us every warning that a tantrum was coming.  Eventually, she blew - and threw a few monster bucks up (from a standstill) rather than take a few measly steps onto the trail.

(I should mention that at this point I was sitting happily on big 'ol Wendy just watching the drama... this is where I figure CM earns his keep :) )

P finally (reluctantly) took a few steps on to the trail and got lots of praise.  Then, CM decided to hop off and lead the mare farther along to reduce the conflict but still make her walk away from her ride back to the barn (and her bf).  We repeated the process until P was willing to walk along the trail however far CM wanted and to return quietly and calmly.

All in all a great success and nobody got hurt.  P did work up more of a stress sweat than I've seen in a while - but it's also time for her to start feeling some pressure.  She doesn't get to chew on the horse in front of her just to feel better and she doesn't get to be totally catered to in order to avoid "negative experiences."  She's got the capacity to deescalate and take some pressure now, which is awesome to watch.

The other success worthy of note is the fact that P was about as hormonal as I have ever seen her - and yet she managed to hold it together under saddle.  Nice to know that at least at this point - hormones are not a significant factor.  They might be the straw that breaks (or broke) the camel's back, but I don't think it's our main issue.  So the scientist in me is happy to put that old consideration to rest...

She does however, look like a total train wreck.  Dull, furry coat (though that's starting to fall out!) and a tragic haircut... I have got to clean this lady up before we head down to Oregon in a few weeks... I know the "outside life" is good for her, but it makes my OCD self twitch!
I mean seriously.  She looks like she's in some sort of sad witness protection program... 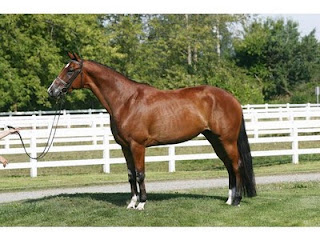 Straight up.  Not the same horse.
Posted by Gingham at 4:14 PM