Friday was our first full day down at the clinic which was filled with all sorts of adventures.

Both mares made complete and total messes of their stalls, and I found them in the morning both standing with their noses in the back corner so their nostrils could wuffle into each others' through the gap in our portable stalls.

Anyway, after throwing some flakes of hay and securing a dirty, delicious breakfast sandwich we took the mares for a walk and hand grazing, before tacking everyone up for a ride.
Yup, everyone.  Which may I remind you is 4 horses... which means we'd need four people (me.. Cowboy man, vet, and..... THE BOY).  ta-da!

All tacked up we headed out to the big pasture to go for a nice walk around the hay fields.  Pia was extremely polite and calm - Cappy (The Boy's Mount) was confused (...so was The Boy), P2 was raring to go, and Aspen was politely tagging along.  It was a gorgeous ride, and I was able to enjoy it all the more so with P2 striding out in front and The Boy managing to stay on board his pony ride.

Once again, no photographic evidence of our lovely ride since The Boy was... well, riding.  But when we got back, I DID dismount first and managed to grab a quick video as Cappy began attacking a mud puddle (he later attempted to roll in it with The Boy still in the saddle, I missed that little fiasco on film).

After our ride the beasts got lunch (so did we) and a bit of a break (so did we).  We got back to the barn in time for the last session of the day to get under way, Pia and Aspen got tacked up to go for a gallop.  P2 continued her nap. 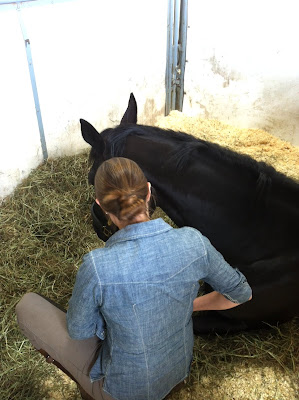 P breezed out nicely and seems to really be moving much more comfortably.  When we got back to the barn, she went straight to the warm up arena to see how much her little P (not pea) brain could handle.

She was a spaz case, but honestly, I have to say that given all the commotion (and cows) I'm impressed that she kept all four of her feet on the ground.  Clearly not thrilled with life, but significantly more tolerant than she would have been a year ago.  and by "tolerant" I mean she didn't kill anyone. :)
Here's a snippet from her first "Arena Ride" in MONTHS.

After P calmly walked around the arena a few times, we walked into the Obstacle Arena and let her explore under saddle a bit.  She was tense, and less willing under saddle, but at a balk, Cowboy Man would hop off, walk her through the offensive obstacle then get back on and complete it under saddle.  P was a star.  There's no way she could have handled any of this under saddle last time we were here, so it was pretty spectacular to see that tangible improvement in her attitude and mental state.

I went back and grabbed Prairie so she could join in on the fun and we all began working the obstacles.

P2 was good with everything except for the water, and the car wash.  P1 was no help with the car wash
We got them both through it (P2 was surprisingly a bit easier to convince the plastic wasn't scary) and then we went to work on water.

Prairie was not that interested, but also not that defiant. This is what her "balk" looked like:

She was polite and brave and eventually we had everyone stomping through the mud puddles happily.

With Coyboy Man playing with P2, I got to get some quality P1 time in, which was much appreciated. 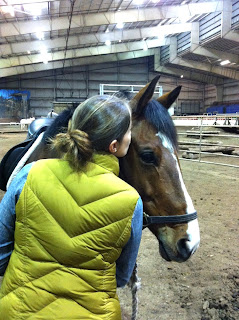 All in all, a very productive day.  P2 was great going for a ride outside, The Boy legged up on a horse, and both mares were confident and trusting with the obstacles in the evening.